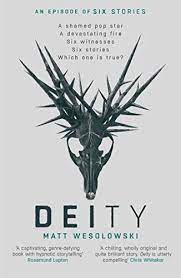 A shamed pop star
A devastating fire
Six witnesses
Six stories
Which one is true?

When pop megastar Zach Crystal dies in a fire at his remote mansion, his mysterious demise rips open the bitter divide between those who adored his music and his endless charity work, and those who viewed him as a despicable predator, who manipulated and abused young and vulnerable girls.

Online journalist, Scott King, whose Six Stories podcasts have become an internet sensation, investigates the accusations of sexual abuse and murder that were levelled at Crystal before he died. But as Scott begins to ask questions and rake over old graves, some startling inconsistencies emerge: Was the fire at Crystal’s remote home really an accident? Are reports of a haunting really true? Why was he never officially charged?

Wesolowski’s Six Stories series has a unique premise – all books are based around Scott King and his true crime podcast ‘Six Stories’. Each book explores an unsolved ‘cold case’ via six interviews with six different people.

Deity is the fifth book in the series and explores the mystery of global superstar, Zach Crystal, who was killed in a suspicious fire on his remote Scottish estate.

Crystal is a bit of an enigma. Despite achieving worldwide fame, he was obsessive and often paranoid about his privacy. After completely disappearing for a number of months, both from the public eye and from his family, he then reappeared to announce a new album but dies before his big comeback. Rumours are now circulating about Crystal’s interest in young girls and Scott King has decided to dig a bit deeper into the matter via interviews with six people who were, in some way, connected to Crystal.

The plot of Deity really is very intriguing. Wesolowski has once again created a complex and intricate mystery and I like the way the story is gradually revealed through a series of interviews. Each interview enables the reader to see the situation through someone else’s eyes, giving the reader several subjective (and potentially unreliable) views on events rather than necessarily the true facts of the matter. The story is very timely, addressing the topic of high-profile abusers, an issue that has unfortunately been all too common in the press in recent years.

I love the way the books are written, although the format can take a little bit of getting used to at first. Deity is essentially a mystery story, with an underlying hint of horror or the supernatural which leads to a truly chilling tale, perfect for those dark wintery nights ahead.

There really is a lot packed into this relatively short book and it makes for a truly compelling read. Sinister, thought-provoking and very entertaining, I can happily say that Deity is another great addition to the series. I would highly recommend the entire Six Stories series and, whilst each book can be read as a standalone novel, I would encourage readers to read the books in order. The entire series really is superb and well worth the read. I am excited to see what Wesolowski and Scott King tackle next…

A huge thanks to Karen Sullivan at Orenda Books for providing me with a review copy of this fantastic book.

Matt Wesolowski is an author from Newcastle-upon-Tyne in the UK. He is an English tutor for young people in care.

Matt started his writing career in horror, and his short horror fiction has been published in numerous UK- and US-based anthologies, such as Midnight Movie Creature, Selfies from the End of the World, Cold Iron and many more. His novella, The Black Land, a horror set on the Northumberland coast, was published in 2013. Matt was a winner of the Pitch Perfect competition at the Bloody Scotland Crime Writing Festival in 2015. His debut thriller, Six Stories, was an Amazon bestseller in the USA, Canada, the UK and Australia, and a WHSmith Fresh Talent pick, and film rights were sold to a major Hollywood studio. A prequel, Hydra, was published in 2018 and became an international bestseller. Changeling, the third book in the series, was published in 2019 and was longlisted for the Theakston’s Old Peculier Crime Novel of the Year. His fourth book, Beast, won the Amazon Publishing Readers’ Independent Voice Book of the Year award in 2020.

Matt lives in Newcastle with his partner and young son, and is currently working on the sixth book in the Six Stories series. Chat to him on Twitter @ConcreteKraken.