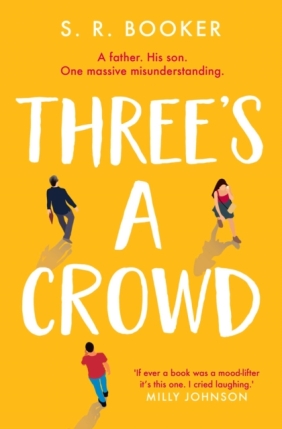 Out-of-work actor Harrietis recuperating from a crash-and-burn affair with Damian – aka ‘Cockweasel’ – and making ends meet as a barista when she meets two rather lovely men. Tomis a regular at the café, and seems like such a nice guy. Smooth-talking DJ Richard is older, but in great shape – a real silver fox.

Deciding to take a chance on both of them, Harriet doesn’t realise at first that she is actually dating father and son. Tom and Richard aren’t on speaking terms, and don’t share a last name – so how was she to know? By the time everyone finds out, both Tom and Richard are truly madly deeply in love with Harriet, and she’s faced with an impossible choice.

But as the battle for her affections intensifies, ‘Cockweasel’ makes an unexpected reappearance and begs her to give him another chance…

I learned about this book during a Simon & Schuster Zoom event and the unusual premise immediately caught my attention. What would happen if a father and son both fall for the same woman… intriguing, right?

I must admit that it took me a good few chapters to get to grips with the writing and the characters, but after a slow start it all fell into place.

The author explores the issue of relationships – family, romantic and friendships – and there are certainly a fair few versions of each in this story! The book also takes a look at mental health. It does so in a humorous fashion but not so as to detract from the seriousness of the issue.

The three main characters are Harriet, Tom and Richard. I found that each character evoked equal measures of sympathy and frustration in me, however I think that is what makes them all so realistic and so interesting. The author presents us with flawed but relatable characters. Harriet was the main cause of my frustration. I felt that she saw herself as a victim of circumstance rather than someone who tries to shape her own future. For example, she knows how Tom and Richard think of her and yet allows the situation to carry on without taking any real steps to make a decision. I don’t think her intentions are ever to hurt, but rather she just floats along with the situation.

Gorgeous George (Tom’s grandfather) and Nancy (Harriet’s Nan) may have small parts in the overall story, however they are certainly scene stealers, particularly Nan who has a penchant for horror movies and who gets some of the best lines in the book!

Three’s A Crowd is a witty, clever and unique take on a romantic comedy. It’s entertaining, engaging, a little bit quirky and ultimately uplifting, plus the plot will certainly keep the reader interested.

I saw someone mention that this would be a good book to turn into a movie or even a serialisation on TV and I absolutely agree, I just need to decide which actors I would choose to play the parts – any suggestions…?

Thanks to Simon & Schuster for providing me with a review copy of Three’s A Crowd.

Author and screenwriter Simon Booker writes crime novels and prime time TV drama for the BBC, ITV and US TV. He is also Writer in Residence at HMP Grendon.  His TV credits include BBC1’s Inspector Lynley Mysteries, Holby City and The Mrs Bradley Mysteries; ITV thrillers The Stepfather and The Blind Date; and Perfect Strangers, the CBS romantic comedy starring Rob Lowe and Anna Friel.  Simon lives in London and Deal. His partner is fellow crime writer and Killer Women co-founder Mel McGrath. They often discuss murder methods over breakfast. Three’s a Crowd is his first contemporary fiction novel