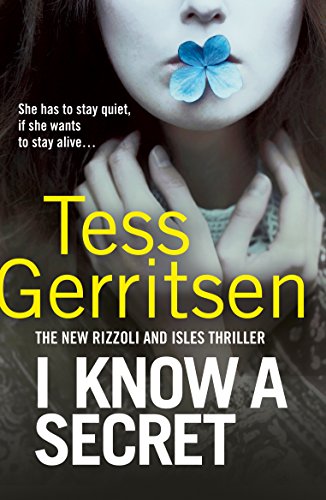 SOMETIMES IT IS SAFER TO BE SEEN BUT NOT HEARD. . .

When a young woman is found dead, Detective Jane Rizzoli and Forensic Pathologist Maura Isles are called to the scene of the murder. Though the body bears startling wounds, the actual cause of death is not immediately clear.

A few days later, another body is discovered – a seemingly unrelated crime, but the lack of an obvious cause of death shows they have more in common than it would first appear.

As Rizzoli and Isles race to discover the link between the victims before the killer can strike again, a mysterious person watches from the sidelines. She has the answers they’re looking for.

But she knows she has to stay quiet, if she wants to stay alive . . .

Today, as part of my efforts to catch up with my TBR list, I’m reviewing I Know a Secret which is book 12 in the Rizzoli & Isles series. This is a series I’ve thoroughly enjoyed over the years and I Know a Secret is yet another thrilling addition to the series.

Boston Detectives Jane Rizzoli and Barry Frost and Medical Examiner, Dr Maura Isles, are investigating a particularly gory murder of a young filmmaker, Cassandra Coyle. When another body is discovered, Jane suspects that the two murders are related but how and, more importantly, why…?  The plot is twisty and tense as they face a race against time to find the evidence and unravel the mystery before the killer strikes again. Gerritsen is always one step ahead, keeping the reader guessing until the very end.

Meanwhile, in an interesting subplot, Maura’s past is back to haunt her as she visits her biological mother’s (serial killer Amalthea Lank) bedside – death certainly is their family business!

I Know a Secret may be part of a series, however it can be read as a standalone novel. The author manages to cleverly include just the right amount of backstory whilst managing to keep a good pace to the developing plot.

The story is pretty dark and the murders are fairly gruesome, so be warned! This book is gritty, absorbing and a real page-turner. Another gripping read from Gerritsen. I’m now eagerly awaiting book 13 in the series!

Internationally bestselling author Tess Gerritsen took an unusual route to a writing career. A graduate of Stanford University, Tess went on to medical school at the University of California, San Francisco, where she was awarded her M.D.

While on maternity leave from her work as a physician, she began to write fiction. In 1987, her first novel was published. Call After Midnight, a romantic thriller, was followed by eight more romantic suspense novels. She also wrote a screenplay, “Adrift”, which aired as a 1993 CBS Movie of the Week starring Kate Jackson.

Her books have been top-3 bestsellers in the United States and number one bestsellers abroad. She has won both the Nero Wolfe Award (for Vanish) and the Rita Award (for The Surgeon). Critics around the world have praised her novels as “Pulse-pounding fun” (Philadelphia Inquirer), “Scary and brilliant” (Toronto Globe and Mail), and “Polished, riveting prose” (Chicago Tribune). Publisher Weekly has dubbed her the “medical suspense queen”.

Now retired from medicine, she writes full time. She lives in Maine.

For more information on Tess Gerritsen and her novels, visit her website: www.tessgerritsen.co.uk.