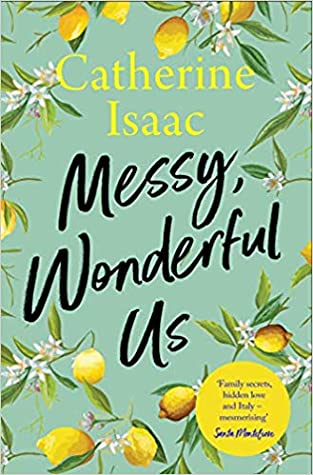 In late 1983, a letter arrives, containing secrets so unthinkable that it is hidden away, apparently forever.

More than three decades later, it is found . . . by the last person who was ever supposed to see it.

When Allie opens an envelope in her grandmother’s house, it changes everything she knows about her family – and herself.

With the truth liable to hurt those she loves most, she hires a private detective to find out what happened to her late mother in the summer before Allie was born. Taking leave from her job as a research scientist, she is led far from home, accompanied by her best friend Ed.

But the secrets that emerge go far beyond anything they were expecting. Now, Allie must find the courage to confront her family’s tangled past and reshape her own future.

I did actually read Messy, Wonderful Us some time ago and started my review but, for whatever reason, I never got around to finishing it. So today it is part of my spring/summer #TBRcatchup.

The story follows Professor Allison Culpepper (aka Allie) and her childhood friend, Ed, as they travel to Italy to learn the truth about Allie’s mother. Having found a letter that potentially indicates a different parentage to that which Allie has always known, it’s no wonder she feels an overwhelming need to uncover past secrets and understand her true identity.  The story is told from both Allie and Ed’s perspectives and both prove to be interesting narrators. However, my favourite parts were the flashbacks that popped up between chapters – those sections certainly proved to be the most revealing.

The book explores the complex nature of love and relationships, and takes a look at the ties that bind us together and those that tear us apart. It deals with some serious issues such as grief, loss,  guilt and domestic violence.  It also provides some interesting social history/commentary, but not too much to drag the story down. Messy, Wonderful US is very well written and I found myself very quickly immersed in the story, feeling almost sad when I reached the end.

The characters are charming, both Allie and Ed are ideal protagonists – intelligent, personable and very relatable – and I particularly enjoyed reading about Grandma Peggy. The only character I immediately disliked was Julia, Ed’s partner. She struck me as being very manipulative. She didn’t outwardly object to Allie traipsing off to Italy with Ed, but ensured that she had a way of controlling the situation even at a distance.

Set near Lake Garda in Italy, the book whisks the reader away to the vineyards, olive groves and blue skies of an Italian summer. It really is a glorious and evocative setting for any story, leaving me longing to book my next holiday to the sun-drenched Italian countryside!

This is a beautifully written story of friendship, family secrets, love and loss. It is delightfully heart-warming and wonderfully entertaining read.  Highly recommended!

Thanks to Books and the City for providing me with a review copy of this wonderful book.

Catherine Isaac is the author of 12 best-selling novels, nine of which were written under the pseudonym Jane Costello.

Catherine was born in Liverpool and began her career as a trainee reporter at the Liverpool Echo, where she worked until she became Editor of the Liverpool Daily Post. She wrote her first book, Bridesmaids, while on maternity leave.

‘You Me Everything’ was her first book writing as Catherine Isaac and was published in 2018. It was selected by the Richard & Judy Book Club, has been translated into 25 languages and a movie adaptation is in development by Lionsgate and Temple Hill. Her next novel, ‘Messy, Wonderful Us’ will be followed by ‘The World At My Feet’, which is scheduled for UK publication in March 2021.

Catherine lives in Liverpool with her husband Mark and three sons. She enjoys running, playing tennis, spending time in the Lake District and reading a lot of books.