He is her husband. She is his captive.

Her husband calls her Jane. That is not her name.

She lives in a small farm cottage, surrounded by vast, open fields. Everywhere she looks, there is space. But she is trapped. No one knows how she got to the UK: no one knows she is there. Visitors rarely come to the farm; if they do, she is never seen.

Her husband records her every movement during the day. If he doesn’t like what he sees, she is punished.

For a long time, escape seemed impossible. But now, something has changed. She has a reason to live and a reason to fight. Now, she is watching him, and waiting . . .

I honestly don’t know where to start with this review. I really can’t adequately put into words my thoughts and feelings about this book. It really is quite simply brilliant, a masterful piece of writing. I was captivated from start to finish, and even afterwards I couldn’t get Jane’s story out of my mind. This book really got under my skin.

Imprisoned, alone and with no real means of escape, it really does feel like Jane is in a hopeless situation. Told in first-person narrative, the reader has the opportunity to gain insight into Jane’s character and to understand her thoughts and emotions surrounding her life in captivity and her feelings towards her captor. A simple yet effective technique to draw the reader further into the story.

It is a story of coercion, control, abuse and modern slavery. Each day, Jane struggles to maintain her own sense of identity. She is a strong, intelligent and, despite her unbearable existence, she proves herself to be a surprisingly resilient character.  She has such spirit and determination, her focus being to get back to her sister.

The villain of the story is Jane’s husband, Lenn. Through Jane’s narrative, we learn of his obsession with order and control (it’s either his way or it’s wrong) but we actually learn very little about the man himself. This is absolutely Jane’s story, not his. It was the small and unfeeling acts that really struck me, such as making Jane choose which of the few precious mementoes of her previous life will be destroyed as punishment for a perceived wrong-doing. Lenn really is such a cold and callous individual, a man without an ounce of goodness in his heart.

People trafficking and modern slavery are perhaps fairly abstract concepts, something we hear about in the news but so far removed from our daily lives. Yet this story illustrates how people can be so easily exploited, especially where illegal immigration is concerned. It paints an, unfortunately, all too realistic picture of what people are experiencing on a daily basis, in the hope of gaining a better life for themselves and their families.

The setting is almost a character in itself – a farm, with rolling fields as far as the eye can see. A place so isolated that Jane can be left alone in the run-down farmhouse whilst Lenn is tending to the farm jobs. This bleak setting adds to the oppressive atmosphere of the story.

The writing is stark and yet compassionate. Each sentence is there for a reason and each description serves a purpose. The story sells itself without the need for anything more. As the tale reached it’s finale, I found myself literally sat on the edge of my seat holding my breath. I couldn’t put the book down. What a breathtaking conclusion!

The book explores the themes of abuse (both physical, emotional and sexual), abduction, captivity, hope and survival. It is dark, disturbing and almost unbearably tense. A truly heart-breaking story, made all the more so when you consider that there are people in the UK today in similar circumstances to Jane. It all seems a bit too plausible, a bit too real…

I’ve tried to think of an adjective to describe this book – compelling, captivating, atmospheric, claustrophobic, uncomfortable, suspenseful, powerful, even hopeful – yet none really seem to do it justice. The Last Thing to Burn is quite simply extraordinary and I really cannot recommend it highly enough. Do yourself a favour, read this book!

A huge thanks to Hodder & Stoughton for providing me with a copy of the book for review. 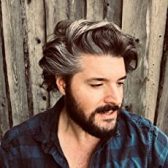 Will Dean grew up in the East Midlands, living in nine different villages before the age of eighteen. After studying law at the LSE, and working many varied jobs in London, he settled in rural Sweden with his wife. He built a wooden house in a boggy forest clearing and it’s from this base that he compulsively reads and writes.

Dark Pines, the first in the Tuva Moodyson series, was published to huge critical acclaim in 2018, was shortlisted for Not the Booker prize, selected for Zoe Ball’s TV Book Club and named as a Daily Telegraph Book of the Year. The Last Thing to Burn is his first standalone novel.

4 thoughts on “#BookReview: #TheLastThingtoBurn by Will Dean”