Today I’m joining the blog tour for Melanie Blake’s new novel, Ruthless Women. Thank you to  Bei at MidasPR for inviting me to take part and for providing me with a copy of the book for review.

Ambition can be deadly

Broadcast to millions from its picturesque location off the coast of Jersey, Falcon Bay was once the world’s most popular soap opera. But with ratings at an all-time low, a new network owner, the malevolent Madeline Kane, arrives on the private island determined to do whatever it takes to get the show back to the number 1 slot.

Director Farrah, leading lady Catherine and producer Amanda are the driven, ambitious women who’ve been trying to hold the production together. But thanks to their handsome but corrupt boss, Jake Monroe, Farrah is losing episodes to male colleagues, seventy-year-old Catherine is terrified of losing the public’s adoration, and Amanda is battling her desire for a forbidden affair with a handsome new employee.

As Madeline’s pressure to revive the show intensifies, she unleashes a true battle of the sexes where the women will do anything to stay in the jobs they love and on the island they call home. Can they team up to bring down their rivals? Or will jealousy, betrayal and revenge rip their friendships apart? As the story reaches its shocking climax, one thing is for certain: only the most ruthless woman will survive…

Ruthless Women is a fictional expose of the murky world simmering beneath the cameras and glamour on one of TV’s most well-loved ‘continuing drama’ (aka ‘soap opera’), Falcon Bay. Once the nation’s favourite soap, Falcon Bay’s producers need to boost it’s flagging ratings or risk being cancelled.

I’m not actually a soap opera fan, however it was fascinating to get a glimpse of behind the scenes. I know the book is fictional, however author Melanie Blake has first hand knowledge of TV drama production so I like to think that there is some element of authenticity there.

The story focuses on 4 friends: Catherine (Grande Dame of the show), Amanda (new mum, side-lined for promotion in favour of her ambitious husband), Farah (writer and director who is struggling to get the recognition she wants) and Helen (casting agent extraordinaire). Each is successful in their own right and yet all of them are struggling with the loss, or potential loss, of identity. The world of TV drama seems to be particularly cut-throat, pitting friend against friend, and I can’t help but feel some sympathy for the women. However, the story does have a distinctly feminist slant, exploring and celebrating female empowerment. The women definitely rule in this book and they certainly are ruthless! It’s good to read a book featuring strong female characters.  The supporting characters are equally as fascinating: there’s tough agent Sheena McQueen, reclusive Honey Hunter, pill-popping Stacey Stonebrook, out-of-work actress Lydia Chambers, prat-of-the-year contender Jake Monroe and the wonderfully Machiavellian Madeline Kane – what a great cast!

I was immediately drawn into the story and found myself gripped by the deviousness and scheming of the various characters. I would like to think that people aren’t really like that in real life but, given the author’s background, I suspect some of the behaviour may well be based on actual experience.  It really is a deliciously entertaining and, in parts, absolutely shocking tale.

Whilst this addictive story may on first sight seem to be a ‘bonkbuster’ (and believe me, there is no shortage of sex in this book!), there is a more disturbing side to the tale, featuring rivalry, abuse of power, sexual politics, ambition and revenge. It covers spousal abuse, child abuse, mental health, gaslighting and addiction – all pretty serious themes. The book also considers the ongoing impact of the recent #MeToo movement and the author takes the opportunity to highlight the difficulties women can face, particularly those of a certain age.

The tension ramps up as the production staff at Falcon Bay try to come up with a story line that will blow their competition out of the water, all whilst trying to manage their chaotic personal lives. I love how the author pokes fun at TV dramas and their constant need to grab the ratings. In this case, the production staff manage to come up with something truly climatic and mind-boggling, more than worthy of soap-opera greatness!

Ruthless Women is raunchy, devious, thrilling, addictive and surprisingly funny – a real page-turner. It was perfect escapism for me whilst in lockdown, although it certainly has persuaded me that I would never want to work in TV!

As one as the UK’s most successful agents, managers and publicists for music stars and TV actresses, Melanie Blake has represented some of the most famous faces on British television and international screens.

Where her debut novel, the No. 1 bestseller The Thunder Girls, was inspired by the early years of her career  spent working in the music industry, her follow up novel Ruthless Women is heavily influenced by the last 15 years Melanie has spent representing more female actresses than any other agent in her genre. Her clients have included Patsy Kensit, Beverley Callard, Michelle Collins, Stephanie Beacham, Emily Lloyd, Denise Welch, Jennie McAlpine, Claire King, Gaynor Faye, Laila Morse, Danniella Westbrook, Sherrie Hewson, Amanda Barrie, Gillian Taylforth and Nadia Sawalha, to name just a few. Nicknamed The Queen Of Soaps, there is no one better placed to write a novel based around a continuing drama and its leading ladies.

Over 25 million people in the UK watch soaps every week and now they’ll get a true glimpse of what really goes on behind the scenes of TV’s most popular shows, and examples of the desperate trade-offs their beloved leading ladies go through to survive the very game they are in. Ruthless Women shows that what takes place behind the cameras is way more shocking and scandalous than what happens on camera.  Even the actresses, who Melanie was worried would be angry about what she’s written, are raving about Ruthless Women too.

For the first time, Melanie Blake reveals her biggest secret, that her career started as an extra on the set of Coronation Street and EastEnders. It was there she began clawing her way from the bottom of the ‘Soap Opera ladder’ to the very top, going on to represent the leading ladies of the very shows she was hired to stand in the background of.

Follow the rest of the tour by visiting the blogs/Twitter profiles listed below: 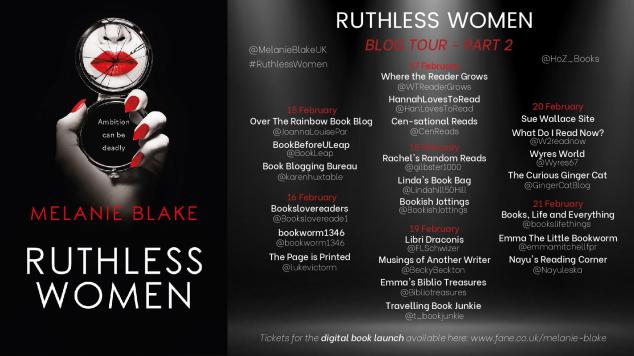