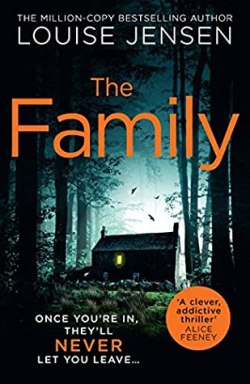 Could one mother’s mistake cost her daughter everything?

ONCE YOU’RE IN, THEY’LL NEVER LET YOU LEAVE.

At Oak Leaf Farm you will find a haven.
Welcome to The Family.

Laura is grieving after the sudden death of her husband. Struggling to cope emotionally and financially, Laura is grateful when a local community, Oak Leaf Organics, offer her and her 17-year-old daughter Tilly a home.

But as Laura and Tilly settle into life with their new ‘family’, sinister things begin to happen. When one of the community dies in suspicious circumstances Laura wants to leave but Tilly, enthralled by the charismatic leader, Alex, refuses to go.

Desperately searching for a way to save her daughter, Laura uncovers a horrifying secret but Alex and his family aren’t the only ones with something to hide. Just as Laura has been digging into their past, they’ve been digging into hers and she discovers the terrifying reason they invited her and Tilly in, and why they’ll never let them leave…

As mentioned in an earlier post, I have spent this summer attempting to work my way through my ever-increasing TBR pile (both physical and digital). One book on that list which I was very keen to get to was The Family by Louise Jensen. I think this may have been the first book that I’ve read by Jensen and it most certainly won’t be the last!

Struggling to cope financially and emotionally following the death of her husband Gavan, Laura gratefully accepts an offer for her and her 17 year old daughter Tilly to stay at a commune on a local farm, Gorphwysfa. Initially overwhelmed by the community’s kindness, generosity and support, Laura gradually starts to become suspicious of both the community and their charismatic and secretive leader, Alex. However, as her suspicions grow, so does Tilly’s immersion into the community. Are Laura’s concerns mere paranoia or is something sinister afoot?

Told through the eyes of both Laura, Tilly and Alex, the story behind Gavan’s death is slowly revealed as, simultaneously, the reader gradually learns of the cause of Alex’s deep-seated issues. The author has skilfully portrayed those three characters and has taken the time to explore their emotions and motivations. The mother-daughter relationship between Laura and Tilly was of particular interest to me. It is sad to note how a little bit of honesty between the two could have helped them to avoid a lot of the problems they experienced. The supporting characters remain mostly undeveloped, placing the spotlight deliberately and entirely on Laura, Tilly and Alex.

I have puzzled over what would persuade seemingly normal, sensible people to get involved in communes and cult-like communities and this book gave me some insight as to why people may find some comfort in that way of life.

The book is fast-paced and twisty, with a number of subplots to grab your attention. As soon as you think you know where the story is going, there will be another surprise to keep the reader on their toes. The story is well-plotted and becomes increasingly tense and atmospheric as the tale becomes darker and more sinister.

The Family is a story of tragedy, grief, family, secrets and lies. It explores the strength of relationships, both those with blood-ties and those of our own choosing. We’ve all heard the saying “blood is thicker than water”, but is that really true?

Chilling, creepy and compelling, The Family is an absolute page-turner from beginning to end. I would definitely recommend this book!

Thank you to HQ and Netgalley for providing a copy of the book for review. 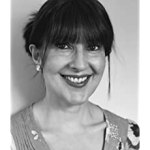 Louise Jensen has sold over a million English language copies of her International No. 1 psychological thrillers The Sister, The Gift, The Surrogate, The Date and The Family. Her novels have also been translated into twenty-five languages, as well as featuring on the USA Today and Wall Street Journal Bestseller’s List. Louise’s sixth thriller, The Stolen Sisters, will be published in Autumn 2020 by Harper Collins.

Louise also has a penchant for exploring the intricacies of relationships through writing heart-breaking, high-concept love stories under the pen name Amelia Henley. Her romantic debut, ‘The Life We Almost Had’ is out now.

Louise lives with her husband, children, madcap dog and a rather naughty cat in Northamptonshire. She loves to hear from readers and writers.

2 thoughts on “Book Review: The Family by Louise Jensen”