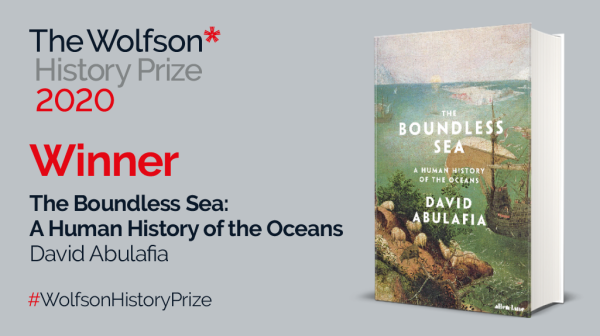 David Abulafia’s The Boundless Sea: A Human History of the Oceans wins £40,000 prize

London. 15 June 2020. A global history of humankind told through our relationship with the world’s oceans has tonight been announced as the winner of the Wolfson History Prize 2020, the most prestigious history prize in the UK, with David Abulafia taking home the £40,000 top award for his book The Boundless Sea: A Human History of the Oceans.

The winner was announced in a virtual ceremony featuring guest appearances from previous Wolfson History Prize winners including Mary Beard (2009), Peter Marshall (2018), and Mary Fulbrook (2019). The ceremony can be viewed here. The Wolfson History Prize is awarded annually to a work of historical non-fiction which combines excellence in research and writing, with readability for a general audience. It is the most valuable non-fiction prize in the UK.

Abulafia beat five other shortlisted authors to take home the coveted Prize: John Barton (A History of the Bible: The Book and its Faiths), Toby Green (A Fistful of Shells: West Africa from the Rise of the Slave Trade to the Age of Revolution), Prashant Kidambi (Cricket Country: An Indian Odyssey in the Age of Empire), Hallie Rubenhold (The Five: The Untold Lives of the Women Killed by Jack the Ripper), and Marion Turner (Chaucer: A European Life).

The Boundless Sea: A Human History of the Oceans (Allen Lane) reveals the importance of the sea to all of our stories, highlighting how it has shaped human societies and cultures for millennia. Abulafia takes readers around the globe and through thousands of years of history, exploring the earliest Polynesian seafarers, who navigated by stars; Viking raids in Northern Europe; piracy in the Caribbean; the Atlantic slave trade; naval skirmishes; through to the realities of modern-day super-shipping.

David Abulafia, Emeritus Professor of Mediterranean History at the University of Cambridge, said upon winning: “Winning the Wolfson History Prize I see as a tribute to all of us who have been trying to communicate history to the public, writing in an accessible way without jargon, and making sure that people see the past as an essential part of our human experience.”

David Cannadine, chair of the Wolfson History Prize Judging Panel commented: “The Boundless Sea tackles a world encompassing subject: humanity’s constantly changing relationship with the seas that cover most of our planet and on which our very lives depend. This is a book of deep scholarship, brilliantly written and we extend our warmest congratulations to David Abulafia”

The Wolfson History Prize is run and awarded by the Wolfson Foundation, an independent charity that awards grants in the fields of science, health, heritage, humanities, and the arts.

Paul Ramsbottom, chief executive at the Wolfson Foundation, said: “This year’s Prize ceremony was virtual for the first time but the essence of what the Prize has stood for across nearly five decades remains constant. We celebrate the importance to society of outstanding and accessible history writing. David Abulafia’s book is magnificently ambitious, brilliantly examining the changing, extraordinarily connections between the vast oceans and humanity. While broad in chronological sweep, this clearly has a strong contemporary resonance – as our relationship with the natural world (including the oceans) is under scrutiny as never before.”

David Abulafia is Emeritus Professor of Mediterranean History at the University of Cambridge, a Fellow of Gonville and Caius College and a former Chairman of the Cambridge History Faculty. His previous books include Frederick II, The Western Mediterranean Kingdoms and The Great Sea, which has won numerous awards and has been translated into a dozen languages. In 2003 he was made Commendatore dell’Ordine della Stella della Solidarietà Italiana in recognition of his work on Italian and Mediterranean history. He is a Fellow of the British Academy and chair of its Medieval Studies section.

About the Wolfson History Prize

First awarded by the Wolfson Foundation in 1972, the Wolfson History Prize remains a beacon of the best historical writing being produced in the UK, reflecting qualities of both readability for a general audience and excellence in writing and research. The most valuable non-fiction writing prize in the UK, the Wolfson History Prize is awarded annually, with the winner receiving £40,000, and the shortlisted authors receiving £4,000 each. Over £1.25 million has been awarded to more than 100 historians in the prize’s 48-year history. Previous winners include Mary Beard, Simon Schama, Eric Hobsbawm, Amanda Vickery, Antony Beevor, Christopher Bayly, and Antonia Fraser.

To be eligible for consideration, authors must be resident in the UK in the year of the book’s publication (the preceding year of the award), must not be a previous winner of the Prize and must have written a book which is carefully researched, well-written and accessible to the non-specialist reader.

To learn more about the Wolfson History Prize please visit https://www.wolfsonhistoryprize.org.uk/ or connect on Twitter via @WolfsonHistory / #WolfsonHistoryPrize.

About the Wolfson History Prize Judges

David Cannadine is an historian of modern British history from 1800 to 2000 and a trustee of the Wolfson Foundation. He is Dodge Professor of History at Princeton University, a Visiting Professor of History at the University of Oxford, the editor of the Oxford Dictionary of National Biography, and became President of the British Academy in July 2017. He has previously taught at the University of Cambridge and Columbia University, New York. He was Director and Professor of History at the Institute of Historical Research from 1998-2003. He is a Fellow of the British Academy, the Royal Society of Literature, the Society of Antiquaries and the Royal Historical Society. In 2009 he was awarded a knighthood for services to scholarship. His publications include Victorious Century: The United Kingdom, 1800-1906 (2017), Margaret Thatcher: A Life And Legacy (2017), The Undivided Past: Humanity Beyond our Differences (2012), Mellon: An American Life (2006), Ornamentalism: How the British Saw Their Empire (2001), Class in Britain (1998), and The Decline and Fall of the British Aristocracy (1990). He has contributed to many national bodies in heritage and the arts, including the National Portrait Gallery, English Heritage, Westminster Abbey, the Victorian Society, Royal Academy Trust and the Library of Birmingham Trust.

Richard Evans is Provost of Gresham College in the City of London and Regius Professor Emeritus of History at the University of Cambridge.  He is the author of numerous books on modern German and European History, including Death in Hamburg: Society and Politics in the Cholera Years 1830-1910, which won the Wolfson History Prize in 1989. His most recent books are The Pursuit of Power: Europe 1815-1914, a volume in the Penguin History of Europe, and Eric Hobsbawm: A Life in History, published in February 2019. From 2010 to 2017 he was President of Wolfson College, Cambridge. He is a Fellow of the British Academy and was knighted in 2012 for services to scholarship.

Diarmaid MacCulloch is a Fellow of Saint Cross College and Campion Hall and Professor of the History of the Church at the University of Oxford. He is a Fellow of the British Academy, the Royal Historical Society and of the Society of Antiquaries of London; he co-edited the Journal of Ecclesiastical History for twenty years. He was ordained deacon in the Church of England in 1987 and in 2012 was knighted for services to scholarship. His chosen research field has been Tudor England (including a biography of Archbishop Thomas Cranmer and a study of the Reformation under Edward VI); he has also written on the wider history of the European Reformation and on world Christianity generally. His History of Christianity: the first three thousand years (winner of the 2010 Hessell-Tiltman Prize and the 2010 Cundill History Prize, Montreal) was followed by the BBC series A History of Christianity (given the Radio Times Readers’ Award, May 2010). Further television work has included How God made the English, 2012, Henry VIII’s Fixer: the rise and fall of Thomas Cromwell, 2013, and Sex and the Church, 2015. His biography of Thomas Cromwell was published in September 2018. He won the Wolfson History Prize in 2004 for Reformation: Europe’s House Divided 1490-1700.

About the Wolfson Foundation

The Wolfson Foundation (www.wolfson.org.uk) is an independent grant-making charity that aims to promote the civic health of society by supporting excellence in science, health, heritage, humanities & the arts. Since 1955, almost £900 million (£1.9 billion in real terms) has been awarded to nearly 11,000 projects and individuals across the UK, all on the basis of expert peer review. The Wolfson Foundation is committed to supporting history and the humanities more broadly. In the past 10 years, awards across the UK of more than £17.5 million have been made to support postgraduate scholarships in the humanities at universities, some £20 million to historic buildings, and over £36 million to museums and galleries. You can connect via twitter @wolfsonfdn.