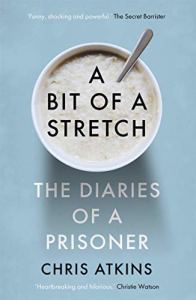 Where can a tin of tuna buy you clean clothes? Where is it easier to get ‘spice’ than paracetamol? Where does self-harm barely raise an eyebrow?

Welcome to Her Majesty’s Prison Service. Like most people, documentary-maker Chris Atkins didn’t spend much time thinking about prisons. But after becoming embroiled in a dodgy scheme to fund his latest film, he was sent down for five years. His new home would be HMP Wandsworth, one of the largest and most dysfunctional prisons in Europe.

With a cast of characters ranging from wily drug dealers to senior officials bent on endless reform, this powerful memoir uncovers the horrifying reality behind the locked gates. Filled with dark humour and shocking stories, A Bit of a Stretch reveals why our creaking prison system is sorely costing us all – and why you should care.

This book is certainly an eye opener. If you thought you knew what goes on inside British prisons, well it’s time to think again!

In 2016, author Chris Atkins was sentenced to 5 years imprisonment after being found guilty of tax fraud. He spent the first 9 months of his sentence at HMP Wandsworth and kept a journal during his time inside. The resulting book is very readable and surprisingly humorous.  Written with a dark ‘gallows’ humour, some of the stories Atkins tells really are very funny in their absurdity. However, humour aside, I found myself gobsmacked at the absolute shambles that is the current prison system. From the poor state of the tiny prison cells to the total lack of communication between the guards and prison authorities, the incompetence displayed is quite frankly astonishing.

It is easy for those of us who have never experienced prison life to say that those in prison have ‘got what they deserved’, or that prison ‘isn’t supposed to be a holiday camp’. However, we’re not talking about luxury here, but rather the very basics of humanity – the right to shower on a weekly basis, the right to medical treatment and the right not be terrorised, bullied or racially abused by our fellow prisoners or even our cell mates. The prisoners, a lot of them suffering from addiction or severe mental health problems, are locked in 6ft x 12ft cells sometimes for up to 24 hours a day due to under staffing or a breakdown in prison procedures. It is hard to grasp the hopelessness and despair that must permeate throughout the wings. Without TVs, books, education and jobs, those prisoners would have nothing positive to focus on. I realised from the book just how essential family phone calls, visits and positive experiences/activities are to a prisoner’s well-being and to their rehabilitation.

Atkins was clever enough to observe how the system really works and was able to get himself moved to the best wing in the prison (Trinity), before making all the right moves to earn his privileges and improve his prospects of making it through his sentence in relative comfort (although in reality the term ‘comfort’ is really is a massive over-exaggeration of what he experienced).  Yet he was one well-educated person amongst a population of thousands and the majority won’t fare as well as him. He was one of the lucky ones.

There are some positive aspects to the book, such as the humour and camaraderie displayed by the prisoners and the way they develop and look after their own communities on the wings. Yet any positivity is massively overshadowed by the chaos, squalor and bleakness of life inside those walls.

I felt particularly sad when Atkins described his separation from his young son, Kit. He was fortunate that both Kit’s mother and grandmother were very supportive and ensured he received visits and regular updates. However, not all prisoners will have that same advantage and it really highlighted to me how it is not only the criminal who is punished by a prison sentence, but also the family left behind.

In the final chapters, Atkins lists the changes that he would make if given the chance. His ideas are reasonable and logical. I wish that I had read that list before reading the book, as I would have been interested to know how my views on his proposals would have changed from beginning to end.

Darkly entertaining, shocking and touching, this book made me laugh out loud, it made me sad to the point of tear, it left me frustrated and it made me very angry. It shows in stark relief the failings of the current UK penal system. The real question is whether the government is doing anything to fix it? Unfortunately, I suspect not…

Thank you to Atlantic Books and Netgalley for providing me with a copy of this book for review.

Chris is best known as a documentary maker. His 2007 debut feature, Taking Liberties, was a Michael Moore inspired documentary castigating the Blair government for undermining civil liberties as part of the war against terror. The film played in dozens of cinemas across the UK, got very strong reviews and was nominated for a film BAFTA in 2008. Chris also wrote an accompanying book, also called Taking Liberties, which was published alongside the film.

His next film, Starsuckers, took aim at the celebrity obsessed media. The documentary became famous for selling fake celebrity stories to the tabloids, engineering a reverse undercover sting on red top hacks, and secretly filming Max Clifford boasting about covering up his clients’ sexual indiscretions. The film made the front page of The Guardian two days running, and faced down legal challenges from the News of The World, Clifford and Bob Geldof. The film premiered at the 2009 London Film Festival, was shown on Channel 4 several times, and was screened to the Leveson Inquiry into press standards.

Chris has also made several notorious TV current affairs films. He spent most of 2011 undercover, secretly filming corrupt private detectives who were running a black market in private information, which became a Dispatches special for Channel 4 – Watching the Detectives. He made another Dispatches special in 2013 – Celebs Brands and Fake Fans – and tricked a slew of Coronation Street stars into plugging fake products on social media. This sting made the front of The Sun and The Mirror, leading ITV to threaten to sue Channel 4. Later that year Chris investigated bad practise in big charities for BBC Panorama, and revealed that Comic Relief was secretly investing millions in alcohol, arms and tobacco companies. The film kicked up a huge press storm, forcing Comic Relief to sell its “sin stocks” and got Chris his 3rd BAFTA nomination.

In 2015 Chris wrote and directed a fiction film imagining what would happen if UKIP actually won that year’s general election. “UKIP: The First 100 Days” was broadcast on Channel 4, and led to an incendiary reaction from UKIP supporters who lodged over 6000 complaints with Ofcom, making it one of the most complained about TV dramas of all time.

In 2016 he was prosecuted for his involvement in an illegal tax scheme, which was used to fund his film Starsuckers. He was convicted in Southwark Crown court, along with several other defendants, and sentenced to five years imprisonment. He spent the first nine months of his sentence at HMP Wandsworth, and kept a detailed diary of his experiences. These have since been written up into a book, A Bit of a Stretch, which was the subject of a seven publisher bidding war when he was released in 2019. The book is due for publication on the 6th February 2020, and has already won praise from The Secret Barrister, Jon Snow, Mark Thomas and John Niven.

He is now back in North London working on a music documentary, and making a podcast series about prison life.

2 thoughts on “A Bit of a Stretch: The Diaries of a Prisoner by Chris Atkins”