On an island off the windswept Irish coast, guests gather for the wedding of the year – the marriage of Jules Keegan and Will Slater.

The wedding cake has barely been cut when one of the guests is found dead. And as a storm unleashes its fury on the island, everyone is trapped.
All have a secret. All have a motive.

Lucy Foley’s latest novel, The Guest List, follows the same ‘locked-room’ type formula as her earlier novel, The Hunting Party, in that it involves: (1) a death, (2) at an isolated location, and (3) with a closed cast of suspects. It also continues the author’s clever trick of revealing the murder at a fairly early stage in the book, and then leaving the reader guessing as to exactly who has been murdered, who committed the crime and what their motive was. This is a formula that cannot help but draw the reader into the story. I was gripped from the first chapter and found myself flying through the pages, eager to find out the identities of both the victim and perpetrator.
The story focuses on the wedding of Will and Jules on the small, remote Irish island of Inis Amploir (translated to mean ‘Cormorant Island’ in English). Once the location for a massacre, Inis Amploir’s dark history adds to the sense of trepidation that surrounds the wedding. The isolated island is bleak and creepy, providing at wonderfully atmospheric setting for the mystery. It reminded me a little bit of Agatha Christie’s novel, And Then There Were None, which also features a remote island as its setting for murder. Inis Amplour is only accessible by boat, an approaching storm leaves the visitors stranded on the island overnight with a murderer in their midst, something that could not fail to dampen the most lively of events!
The chapters are split between a number of characters and I liked the way each narrator is given a description: Aoife – the wedding planner; Hannah – the plus-one; Jules – the bride; Johnno – the best man; and, Olivia – the bridesmaid. It emphasised each character’s position in the wedding party and also helped me remember who everyone was. The author does a great job with the characterisation, giving them each an intriguing backstory that places them front and centre when exploring the possible motives for murder. The way the author uses the characters to advance the story moves The Guest List from a classic murder mystery to  a part-crime-fiction / part-psychological suspense.
The story flips between the day before the wedding and the wedding night, ramping up the tension as each character’s motive for murder if gradually revealed. Everyone holds on to some dark secrets about their past and everyone seems to have a motive for the murder.
The story is cleverly and precisely plotted, ensuring the steady increase in suspense as the plot progresses. The high-emotions of the wedding and the gathering appears to have a pressure-cooker-type effect on the group, as tensions come rushing to the surface. It is somewhat unsettling to think that there could be so many simmering resentments amongst one couple’s closest friends and family.  No one is quite what they seem. The story reminds us that sometimes friendships persist out of shared experiences or merely habit, rather than from respect, like or admiration. Secrets unfold and past traumas come to light as each character takes their turn in the spotlight, resulting in an intricate, gradual and satisfying revelation and conclusion.
I was totally gripped by The Guest List. It was tense, entertaining and full of thrilling secrets and reveals. The book was one of  my most anticipated reads of 2020 and it did not disappoint. This book has certainly made its way to the top of my Top 10 reads for the year and I would highly recommend it to anyone who enjoys a binge-worthy crime / suspense novel.
Huge thanks to the publisher for providing me with a copy of The Guest List for review. 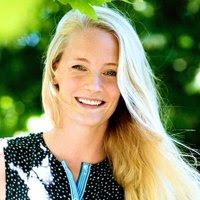 Lucy Foley studied English Literature at Durham and UCL universities and worked for several years as a fiction editor in the publishing industry, before leaving to write full-time. The Hunting Party is her debut crime novel, inspired by a particularly remote spot in Scotland that fired her imagination.
Lucy is also the author of three historical novels, which have been translated into sixteen languages. Her journalism has appeared in ES Magazine, Sunday Times Style, Grazia and more.
Contact Links