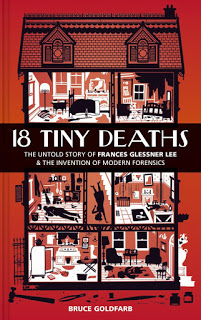 Today is our stop on the blog tour for 18 Tiny Deaths by Bruce Goldfarb. Thanks to Anne Cater from Random Things Tours and Octopus Books for inviting me to take part.

‘For most of human history, sudden and unexpected deaths of a suspicious nature, when they were investigated at all, were examined by lay persons without any formal training. People often got away with murder. Modern forensic investigation originates with Frances Glessner Lee – a pivotal figure in police science.’
18 Tiny Deaths is the remarkable story of how one woman changed the face of murder investigation forever.
Born in 1878, Frances Glessner Lee’s world was set to be confined to the domestic sphere. She was never expected to have a career, let alone one steeped in death and depravity. Yet she was to become known as ‘the mother of forensic science’.
This is her story.
Frances Glessner Lee’s mission was simple: she wanted to train detectives to ‘convict the guilty, clear the innocent and find the truth in a nutshell’. This was a time of widespread corruption, amateur sleuthing and bungled cases. With the help of her friend, the pioneering medical examiner George Magrath, Frances set out to revolutionise police investigation.
Her relentless pursuit of justice led her to create ‘The Nutshell Studies of Unexplained Death’, a series of dollhouse-sized crime scene dioramas depicting actual cases in exquisitely minute detail that Lee used to teach homicide investigators.
They were first used in homicide seminars at Harvard Medical School in the 1930s, and then became part of the longest running and still the highest regarded police training seminar in America.
Celebrated the world over by scientists, artists and miniaturists, these macabre scenes helped to establish her legendary reputation as ‘the mother of modern forensics’, influencing people the world over, including Scotland Yard.
Frances wanted justice for all. She became instrumental in elevating murder investigation to a scientific discipline.

This book is something a bit different to my usual picks. I don’t generally read a lot of non-fiction, however I was intrigued by this one. Despite being a huge fan of crime fiction, I had never heard of Frances Glassner Lee until earlier this year when I received an email from the Killer Women Festival organisers asking me to pick my options for the festival talks. One of those options was a workshop relating to the Nutshell Studies of Unexplained Deaths. This intrigued me and following a bit more research, I discovered that The Nutshell Studies of Unexplained Deaths are a series of nineteen intricately designed dollhouse-style dioramas created by Frances Glessner Lee in the mid 1900’s. Those dioramas were based around 19 different crime scenes and were developed to assist in the teaching of ‘Legal Medicine’. They were created to help medical examiners learn how to examine a crime scene and how to identify possible evidence. It really is absolutely fascinating.
When I received the email from Random Book Tours inviting me to take part in the blog tour for 18 Tiny Deaths, I jumped at the chance to learn more about Glessner Lee and what motivated her to become such a pioneer of forensic medicine, particularly in an era in which the medical field would be dominated by men and in which legal (or forensic) medicine was still in its infancy.
As I mention above, I don’t tend to read much non-fiction, generally preferring more high-octane thrillers. It therefore took me a bit of time to adjust myself to reading a slower paced and more studious style of book. However I did find the whole subject to be interesting and thought-provoking. Glessner Lee really was a pioneer in the field, providing the funding and gravitas required to reinvent the entire US forensic medical system. In providing significant funding to Harvard University and with strict terms to be followed for use of that endowment, as Goldfarb suggests, Glessner Lee was instrumental in creating an entirely new field of medical practice and it is really quite astonishing to think that her work and techniques are still used by teachers today.
Aside from her interest in forensic medicine, I was intrigued to read about Glessner Lee’s love of miniatures. This started with a miniature of the Chicago Symphony Orchestra created for her mother and even led to a 10-performance Finger Tip Theatre show in which Glessner Lee’s fore- and middle fingers undertook an entire performance whilst clothed in tiny costumes, raising money for a local charity.  It was this interest in miniatures which came to Glessner Lee’s mind when pondering the question of how to teach students how to really observe a crime scene and which ultimately led to the production of the Nutshell Studies of Unexplained Deaths, a project to which Glessner Lee spared no expense or effort.
In fact, I was hugely surprised to read that today in the US, there are still 2,342 separate death-investigation systems with no federal laws or national standards to regulate how unexplained deaths should be investigated. It seems, therefore, that the field of forensic medicine may still be in its infancy now. I wonder what Glessner Lee would make of the developments in forensic medicine today and what she would think of the continuing lack of consistency in this field across the US.
Thanks to Goldfarb and Octopus books for providing me with an ARC of 18 Tiny Deaths and enabling me to learn more about Glessner Lee and her fascinating Nutshell Studies.
About the Author

Bruce Goldfard is the executive assistant to the Chief Medical Examiner for the state of Maryland, US, where the  Nutshell Studies of Unexplained Death’ are housed. He is the public information officer for the Office of the Chief Medical Examiner and trained as a forensic investigator.
Bruce began his career as a paramedic before becoming an award-winning journalist reporting on medicine, science and health. Through his work with the Nutshell Studies, Bruce earned the trust of Frances Glessner Lee’s family and caretakers of her estate and was designated Lee’s officient biographer.
Contact Links:
Website: http://brucegoldfarb.com/
Twitter: @bruce_goldfarb
Facebook: @brucegoldfarb
Instagram: @eighteentinydeaths
BUY LINKS
Amazon UK  |  Amazon US  |  Goodreads 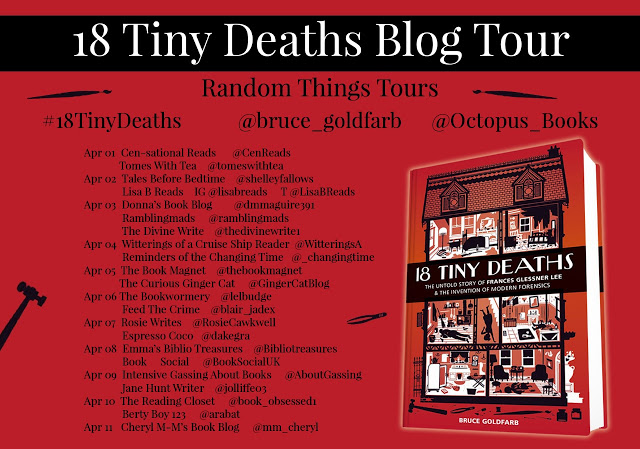