Blurb
A mother’s job is to protect her child…

But everyone makes mistakes…

Gripping, exciting and emotional, this book will grab you from the first page and refuse to let you go until the final chapter!
I never thought it would happen to me…

One moment I had it all – a gorgeous husband, a beautiful home, a fulfilling career and two adorable children. The next, everything came crashing down around me.

They said it was my fault. They said I’m the worst mother in the world. And even though I can’t remember what happened that day, they wouldn’t lie to me. These are my friends, my family, people I trust.

But then why do I have this creeping sensation that something is wrong? Why do I feel like people are keeping secrets? Am I really as guilty as they say? And if I’m not, what will happen when the truth comes out…?

Review
Following on from her humorous murder mystery series, the Cora Baxter Mysteries (The Dead Dog Day, The Deadline and The Development) published by Accent Press, Jackie Kabler has taken a slight change in direction. Am I Guilty? is her debut psychological suspense novel published via the HarperCollins imprint, Killer Reads.  The ebook was published on 19 April 2019 and I was so excited to finally get my hands on it!
Since listening to a certain podcast recommended by my husband, I have found myself obsessed with the first sentence/paragraph of a book. I want it to really draw me in. I want to see scene setting, character introduction and intrigue – Am I Guilty? certainly delivers in this regard. The moment I started reading the book, I was hooked!
Thea is living through every mother’s worst nightmare – the loss of a child. This situation is made all the more tragic by the knowledge that Zander’s death is all her fault…. or is it?  Can she trust her returning memories?  Will those memories return in full before the trial date?

It is a difficult subject matter to address, yet Kabler manages to do so sympathetically. The main character, Thea, is well-rounded if somewhat unstable. You could forgive this due to the recent circumstances, yet there is suggestion that this was the case even prior to Zander’s death.  She has long been the centre of a tug-of-war between her husband Rupert and her best friend Isla. Despite Thea’s obvious flaws, I had a lot of sympathy for her and I was convinced that there was more to the story than Thea believed.

The book is written from several points of view – Thea, Annabelle, Flora, Rupert, Greg and Isla.  The character interactions were interesting to read about and whilst some of those characters feature more prominently than others, the use of multiple voices enables the reader to get to know the characters whilst gradually piecing together the puzzle surrounding that same fateful day.
I enjoy the challenge of a good mystery, although more often than not I find myself successfully predicting the outcome. In this case, I didn’t guess. The story is well crafted and precisely plotted. Each and every character seems capable of something, but what that something was I wasn’t sure.
Whilst I very much enjoyed Kabler’s earlier novels, Am I Guilty? really is a step up. What a rollercoaster of a ride! Full to the brim of twists and turns, the book really did have me on the edge of my seat. Whilst it doesn’t necessarily have an ‘in your face’ shock factor, it certainly packs a punch; it is completely unnerving and totally gripping.

Would I recommend this book to others – absolutely yes! It is one of the best psychological suspense novels that I’ve read this year.
If this sounds like the book for you, the ebook version is already available and the paperback version is being published tomorrow (27 June 2019). Links to the book are listed below.
About the Author 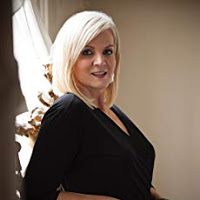 Jackie Kabler was born in Coventry but spent much of her childhood in Ireland. She worked as a newspaper reporter and then a television news correspondent for twenty years, spending nearly a decade on GMTV followed by stints with ITN and BBC News. During that time, she covered major stories around the world including the Kosovo crisis, the impeachment of President Clinton, the Asian tsunami, famine in Ethiopia, the Soham murders and the disappearance of Madeleine McCann. Jackie now divides her time between crime writing and her job as a presenter on shopping channel QVC. She has a degree in zoology, runs long distances for fun and lives in Gloucestershire with her husband.

One thought on “Book Review: Am I Guilty? by Jackie Kabler”