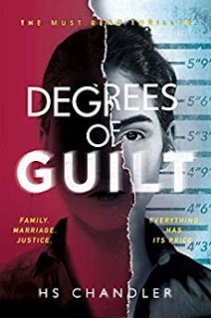 Huge congratulations to HS Chandler for today’s publication of her new courtroom drama, Degrees of Guilt, and thanks to Orion Books for providing me with an advanced copy of the book for review.

When you read this book, you will think you know every twist in the tale.

Maria is on trial for attempted murder.

She has confessed to the crime and wanted her husband dead.

Lottie is on the jury, trying to decide her fate.

She embarks on an illicit affair with a stranger, and her husband can never find out.

You may think you know who is guilty and who is innocent.

You will be wrong.

Degrees of Guilt is a page-turning courtroom drama set predominantly in Bristol Crown Court and focusing on two people involved in the Bloxham trial.
Maria Bloxham is accused of the attempted murder of her celebrity husband of 18 years, Dr Edward Bloxham. Scratching under the surface reveals that their marriage may not have been quite as rosy as you might expect.
Charlotte ‘Lottie’ Hiraj is a juror assigned to the Bloxham trial. She feels immediate sympathy for Maria because her marriage is also on the rocks. Lottie feels that she is losing her sense of self since becoming a wife and a mother.
The book explores the darker unhealthier side of relationships, a particularly topical issue in light of the recent #MeToo movement.  It also explores some emotive issues such as marital abuse and self-harming in a thought-provoking way. It explains how women can find themselves unable to leave an abusive relationship but also considers whether the situation is as clear-cut as suggested. 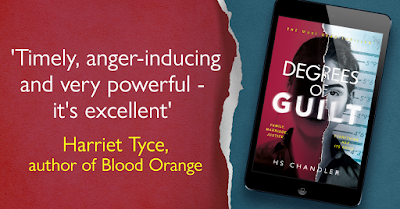 I love a good courtroom drama and one of the most fascinating parts of this story for me was the actions and group dynamics of the jury. The author has a background in law herself and she has cleverly not fallen into the trap of sensationalising the setting or the trial, bringing a real sense of authenticity to the book. Whilst we never really know what goes on in a jury room, it strikes me as somewhat illogical to allow such an important decision as someone’s guilt or innocence to rest with a group of people who more often that not will have some preconceptions/bias and whom may be easily pressured to align their views with other members of the jury in order to bring their jury duty to an end. The criminal justice system really is shockingly vulnerable to human fallibilities and to those barristers who are happy to twist evidence in order to get the win. In Maria’s case, the tension quickly ramps up as we wonder whether justice will prevail?

Chandler has produces a compulsive and shocking story, full of suspense and twists and turns. Just as you think you know where the story is heading, it will flip around and sprint off in another direction.
Degrees of Guilt is a gripping and entertaining read. Thoroughly recommended for fans of courtroom dramas, legal thrillers and psychological thrillers.
Many thanks to Orion for providing me with an early copy of the book for review.
About the Author

HS Chandler is the pen name of Helen Fields. As HS Chandler she writes psychological thrillers and legal thrillers. With a background as a criminal and family law barrister, she now runs a media company and writes the Callanach crime series. 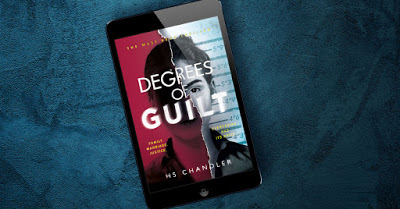