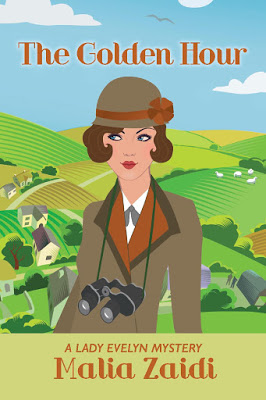 I am delighted to be hosting today’s stop on the blog tour for The Golden Hour, book 4 in the ‘Lady Evelyn Mysteries’ series by author Malia Zaidi. A big thanks to Emma from damppebbles blog tours for inviting me to take part in the blog tour.

London 1927
Lady Evelyn Carlisle has barely arrived in London when familial duty calls her away again. Her cousin Gemma is desperate for help with her ailing mother before her imminent wedding, which Evelyn knew nothing about! Aunt Agnes in tow, she journeys to Scotland, expecting to find Malmo Manor in turmoil. To her surprise, her Scottish family has been keeping far more secrets than the troubled state of their matriarch. Adding to the tension in the house a neighbour has opened his home, Elderbrooke Park, as a retreat for artistic veterans of the Great War. This development does not sit well with everyone in the community. Is thesuspicion towards the residents a catalyst for murder? A tragedy at Elderbrooke Park’s May Day celebration awakens Evelyn’s sleuthing instinct, which is strengthened when the story of another unsolved death emerges, connected to her own family. What she uncovers on her quest to expose the truth will change several lives forever, including her own.
With the shadow of history looming over her, Evelyn must trust in her instinct and ability to comb through the past to understand the present, before themurderer can stop her and tragedy strikes again.

The Golden Hour is the fourth book in the Lady Evelyn Carlisle Mysteries and is reminiscent of the classic golden-era detective story. There is a country house setting (or two in fact!), an amateur sleuth, a complex plot, numerous clues and a few red-herrings – everything required to capture my interest and put my detecting skills to work!
I have not read the earlier books in the series, however I am happy to confirm that this book can be read as a standalone. There are enough tantalising hints to make me want to go back and read those earlier books, but not too many that you feel as though you have missed out on something vital.
In The Golden Hour, Lady Evelyn finds herself in Scotland. Her cousin Gemma is getting married to Sebastian and is concerned that her mother (Aunt Iris) is acting more oddly that unusual. Evelyn is therefore called in to supervise. Upon arrival, she realises that a lot of the unrest at Malmo Manor centres around the neighbouring estate of Elderbrooke Park, an artistic retreat for traumatised/injured veterans. When Evelyn stumbles across a murder and notes a similarity to another murder several years earlier, she begins to investigate in the hope of finding the murderer before he (or she) can strike again!
Evelyn is a great protagonist for the story. She is feisty, intelligent, kind and very likeable.  She is also determined, observant and fearless – great qualities for an amateur sleuth! I enjoyed the way that the supporting characters gradually develop through Evelyn’s eyes rather than through the author’s narration. I particularly liked the character of Aunt Agnes and the relationship gradually emerging between her and Evelyn.
The prose is light and easy to read. It occasionally veers off towards the descriptive, providing the reader with time to consider the latest clues. The plot is a good old-fashioned mystery which relies on a sense of logic to sort out the real clues from the red-herrings.
Whilst initially somewhat of a slow burner, however I soon found myself gripped by the mystery and eager to reach the final reveal. It is an engaging detective novel and a great choice for fans of historical mysteries and classic whodunits. I’m keen to hear more from Lady Evelyn, so I shall certainly be going back to read the earlier books in the series. Hopefully book 5 will be on its way before too long….

Malia Zaidi is the author of the Lady Evelyn Mysteries. She studied at the University of Pittsburgh and at the University of Oxford. Having grown up in Germany, she currently lives in Washington DC, though through her love of reading, she resides vicariously (if temporarily) in countries around the world.
BUY LINKS
Amazon UK  |  Amazon US  |  Goodreads
Check out the other stops on the blog tour…