Blurb
I’ve heard all about you, Miss Denby. Everyone knows you have a nose for murder. Poppy Denby is intrigued when she is invited to attend the auction for the Death Mask of Nefertiti. Held on the country estate of Sir James Maddox, a famous explorer, the auction promises to be a controversial and newsworthy affair. Representatives from the world’s leading museums are gathering to bid on the mask, which was discovered in Egypt. Poppy quickly sniffs out that the mask was not the only thing found that night: the underground chamber also contained a dead body. Poppy and her colleagues from The Daily Globe, who are trying to stay one step ahead of their rivals from The London Courier, dismiss rumours about the mask’s ancient curse. But when one of the auction party is murdered, and someone starts stalking Poppy, the race is on to find the killer before the curse can strike again.
Review
The Cairo Brief, the fourth book in the Poppy Denby series. Set in the 1920’s (with a slight detour to 1914), it is a rather charming tale of murder and skulduggery in a secluded English country house setting – typical of a golden-age ‘whodunit’ as made famous by the likes of Agatha Christie, Dorothy L. Sayers and Margery Allingham. Further reminiscent of those late great authors, The Cairo Brief provides a plot-driven mystery in which clues are slowly revealed, allowing the reader to join in the process of deduction along with the protagonist, Poppy Denby. Part of the joy of a good detective novel is trying to reach a conclusion before the detective and The Cairo Brief offers that challenge.
Journalist, and keen investigator, Poppy is a delightful protagonist. She is intelligent, determined and very likable. The ‘murder most horrid’ has aroused Poppy’s sense of justice (in fact, if you read through the series you will note that social justice is a common theme and one which frequently raises Poppy’s ire) and she wants nothing more than to bring the perpetrator to justice, despite any threat to her own well-being. The supporting characters are an eclectic selection of lords and ladies, actresses and actors, journalists and photographers, antiquity experts, government agents, servants and fake psychics, not to mention some real historical figures thrown into the mix such as Sir Arthur Conan Doyle, Emmeline Pankhurst and Howard Carter (what a cast!).

I did have a little chuckle when the butler appeared as one of the suspects. Whenever I read a detective novel, my husband will ask me if ‘the butler did it’?  Usually authors will shy away from this cliche and, for some reason, it tickled me that this could be how the book turns out (I won’t actually reveal if it does or not!). In fact, mystery writer and art critic, SS Van Dine once published a series of rules for would-be crime authors and rule 11 states that “A servant must not be chosen by the author as the culprit…. It is a too easy solution”.  However, they do say that rules are there to be broken…

The writing style fits well with the story. The author writes with quite a descriptive turn, evoking vivid imagery of the historical backdrop, of fashion, cars and society in the English jazz age, yet she cleverly does so without any long overly-wordy passages which get in the way of the story.

I particularly loved the historical facts peppering the book. Whilst the story is fictional, it is fascinating to read/see how the plot intersects with real historical events and characters. I was previously unaware that Lady Jean Conan Doyle ran seances. I’m sure this would have been a great parlour trick in those days, when people had less scientific knowledge and were generally less cynical. I found it interesting to read about how a seance could have been faked/manipulated a century ago without modern methods.

Whilst The Cairo Brief could be read as a standalone novel, I would recommend starting the series at the beginning. It is a charming series and reading in order provides some helpful information about the main characters’ backgrounds.  In addition, there is an underlying subplot which runs through the series, relating to Poppy’s relationship with photographer, Daniel. Having read the earlier books in the series will enable the reader to make more sense of this aspect of the tale.  However, whilst there is a small element of romance within The Cairo Brief, it is minimal and does not interfere with the overall plot.

Thank you to Rhoda Hardie, Lion Fiction and Fiona Veitch Smith for inviting me to joint the blog tour for The Cairo Brief. This was the perfect book to curl up with on a wet and windy Sunday afternoon. I have enjoyed the Poppy Denby series and The Cairo Brief is no exception. It is a charming historical murder mystery and a wonderfully entertaining read, one which I thoroughly enjoyed even if I didn’t work out ‘whodunit’ until it became obvious at the very end!

Fiona was born in Corbridge, Northumberland, but spent her teenage years and her 20s in South Africa. she returned to England in 2002 and lives with her husband, daughter and dog in Newcastle upon Tyne. She works full-time as an author, but occasionally lectures part-time in journalism at Newcastle University and formerly in creative writing and scriptwriting at Northumbria University.

When she’s not writing she enjoys eating cheesecake, playing jazz clarinet and practising Pilates (not to be confused with the Pilates of her historical novel!) – but rarely at the same time. She also spends many hours walking her dog Ricky, which she finds gives her invaluable ‘plotting time’, as well as gardening.

BUY LINKS
AMAZON UK  |  AMAZON US  |  GOODREADS
You can catch up with the other stops on this blog tour as listed below: 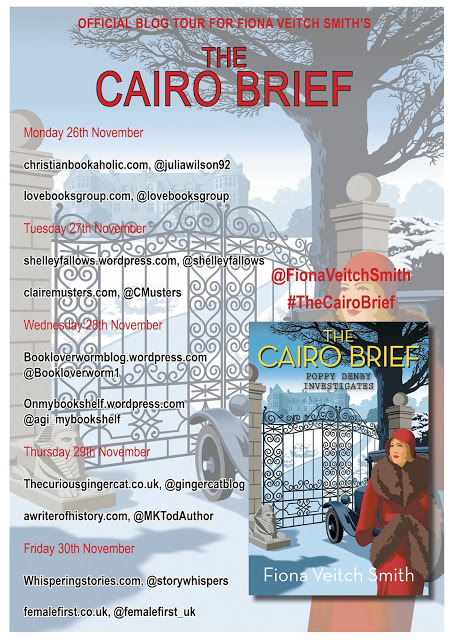