Author: Laura Purcell
Publisher: Raven Books
Publication Date 20 September 2018
Website: laurapurcell.com
Twitter: @spookypurcell
Blurb
Dorothea and Ruth.
Prison visitor and prisoner. Powerful and powerless.
Dorothea Truelove is young, wealthy and beautiful. Ruth Butterham is young, poor and awaiting trial for murder.
When Dorothea’s charitable work leads her to Oakgate Prison, she is delighted to have the chance to explore her fascination with phrenology and test her hypothesis that the shape of a person’s skull can cast a light on their darkest crimes. But when she meets teenage seamstress Ruth, she is faced with another theory: that it is possible to kill with a needle and thread. For Ruth attributes her crimes to a supernatural power inherent in her stitches.
The story Ruth has to tell of her deadly creations, of bitterness and betrayal, of death and dresses, will shake Dorothea’s belief in rationality, and the power of redemption.
Can Ruth be trusted? Is she mad, or a murderer?
Review

The Corset is the chilling second novel from Laura Purcell.  It tells the tale of two young women: Dorothea the prison visitor and Ruth the prisoner. There is a world of difference between the two women. Dorothea is beautiful, wealthy and spends her time on the study of phrenology (a pseudo-scientific area of study that was based on the belief that the measurements of a person’s skull provided indicators of that person’s character and mental ability). Ruth is a talented seamstress yet poor, incarcerated and awaiting trial for murder. When Dorothea is called to the prison to visit Ruth as part of her charitable work, she hopes to have the opportunity to study the skull of a murderer. Dorothea gets her wish and more, as Ruth tells her a dark tale of death, destruction and betrayal. The tale is implausible, yet Dorothea can’t help but have doubts about Ruth’s guilt. Is Ruth a cold-blooded killer or is something more sinister afoot?
I found the phrenology aspect of the story to be fascinating. It is a subject that became very popular in Victorian times and it really is quite a very interesting topic to read about, if you find yourself with a few moments spare.
I very much enjoyed Purcell’s style of writing and found myself hooked from the very first chapter, being quickly immersed in Ruth’s world.  One of the things I loved about The Corset was Purcell’s characters. Mrs Metyard is the perfect larger-than-life villain and Ruth is a great protagonist and a wonderful narrator. However, I found Dorothea slightly harder to warm to. She is certainly a strong female character, yet I found her a little bit self-important. Whilst she gives the impression of being scientific and broad-minded, she struggles to accept any investigative results that don’t fit in with her own hypotheses. I would expect a true scientist to find anomalous results fascinating, yet in Dorothea’s case I feel that she takes it as a slight upon her own knowledge and intelligence.
The setting for the story has a particularly claustrophobic feel, being set predominantly within the walls of the jail or in the dressmaker’s shop where Ruth was just as much a prisoner. Even the scenes set out-and-about with Dorothea have a stifling feel to them, as she is never allowed out unless accompanied by a chaperone (usually her dour but trusty maid, Tilda). There is an underlying sense of  oppression, confinement and restlessness running throughout the tale.
The Corset is a fascinating and twisty tale of fear, horror and death.  It is a splendid gothic thriller, combining an eerie mystery, a tantalising hint towards the supernatural and an evocative portrait of Victorian society.

My only complaint (not really!) was that since I read The Corset via the fantastic app, PigeonHole, the book was in a serialised version meaning that I couldn’t binge-read it in one go! 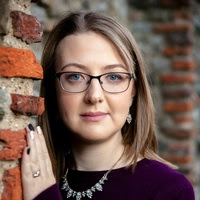 Laura Purcell is a former bookseller and lives in Colchester with her husband and pet guinea pigs.
Her first novel for Raven Books The Silent Companions won the WH Smith Thumping Good Read Award 2018 and featured in both the Zoe Ball and Radio 2 Book Clubs.
BUY LINKS
Amazon UK  |  Amazon US  |  Goodreads  |  Waterstones |  iBooks