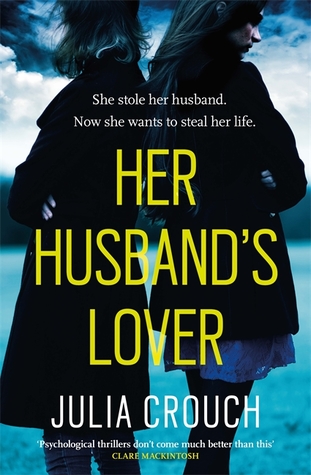 She stole her husband. Now she wants to steal her life.

After the horrors of the past, Louisa Williams is desperate to make a clean start.

Her husband Sam is dead. Her children, too, are gone, victims of the car accident in which he died.

Sam said that she would never get away from him. That he would hound her to death if she tried to leave. Louisa never thought that he would want to harm their children though.

But then she never thought that he would betray her with a woman like Sophie.

And now Sophie is determined to take all that Louisa has left. She wants to destroy her reputation and to take what she thinks is owed her – the life she would have had if Sam had lived.

Her husband’s lover wants to take her life. The only question is will Louisa let her?
Review


According to Google, Julia Crouch is credited with first applying the term ‘domestic noir’ to literature and unsurprisingly her fifth book, My Husband’s Lover, is yet another example of her expertise within this genre.

The story begins as Louisa is in hospital following a horrific car accident which destroyed her family.  She has lost her husband Sam and her beautiful children, Poppy and Leon. She has also been left with memory loss.

The story is told from two women’s point of view: Louisa (the wife) and Sophie (the lover).

Louisa describes a terrible, vindictive man who threatened to take revenge on her if she left him.

In comparison, Sophie – the vengeful and pregnant lover – describes a loving man who was trapped in his marriage. She is determined to destroy Louisa’s life and claim an inheritance for her unborn child.

The dual narrative lends itself well to the unreliableness of the narrators. With Louisa’s memory loss and Sophie’s tenuous grip on reality/sanity – who, if anyone, can be trusted to give a true version of events? As the story continues, the reader will find themselves unsure as to who really deserves their sympathy.

I thought the character development was clever, using their own memories of past events and descriptions of current events to gradually mould Louisa and Sophie into complex three dimensional characters. The reader will find their feelings about each character flipping several times throughout the story. Both ultimately prove to be selfish and unlikeable characters, yet I was still keen to learn more about them and their underlying motives for acting as they do.

It’s hard to say much about the plot without giving too much away. The story weaves between past and present, gradually unravelling the truth leading up to the tragic events. Crouch is certainly an expert storyteller. The story is dark and disturbing, with twists and turns that leave the reader wrong-footed. Whilst there are a few moments where the reader will have to suspend their disbelief and accept what they are told, these moments merely adds to the drama of the tale. The story proceeds at a steady pace and with good flow, making for an uncomfortable but compelling read.

Her Husband’s Lover is a brilliantly addictive psychological thriller that will keep you guessing until the end. In fact, it is only as the book ends that you really appreciate what a well-constructed story this is. It is tense, unsettling and completely unputdownable.

Julia Crouch grew up in Cambridge and studied Drama at Bristol University. She spent ten years working as a theatre director and playwright, then, after a spell of teaching, she somehow became a successful graphic and website designer, a career she followed for another decade while raising her three children. An MA in sequential illustration re-awoke her love of narrative and a couple of Open University creative writing courses brought it to the fore.

Cuckoo, her first novel, emerged as a very rough draft during NaNoWriMo (National Novel Writing Month) in 2008. A year’s editing got it ready for submission to an agent and within a couple of months she had a book deal with Headline and had given up the day job.

Unable to find a sub-genre of crime writing that neatly described her work, she came up with the term Domestic Noir, which is now widely accepted as the label for one of the most popular crime genres today. She has even written a foreword to a book of academic essays on the subject.

She works in a shed at the bottom of the Brighton house she shares with her husband, the actor and playwright Tim Crouch, their three children, two cats called Keith and Sandra, and about twelve guitars (you can find #Keith, who has his own hashtag, on twitter). She is a self-confessed geek and fights a daily battle to resist tinkering with the code on her website, which can be found at http://www.juliacrouch.co.uk.