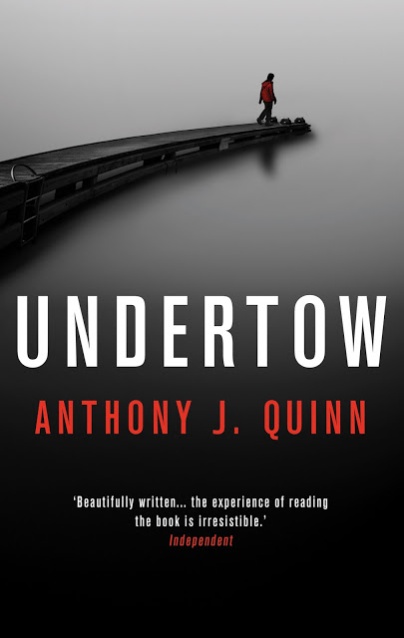 Today I’m featuring a book that I am hugely looking forward to reading – Undertow by Anthony J Quinn. Undertow is book 5 in Quinn’s Inspector Celcius Daly series. I am thrilled to be part of the blog tour to support the publication of Undertow and my thanks to Blake Brooks from Head of Zeus for inviting me to take part and for the review copy of Undertow which is on my TBR pile for the upcoming Christmas holidays.
Thanks also to the author, Anthony J Quinn for providing the interesting guest post below, providing some further explanation about the backdrop to the book and the author’s reasoning behind his choice of a rural rather than city setting.
Blurb
A simple case of suicide takes on a more sinister tone when Detective Celcius Daly travels across the Irish border to the desolate village of Dreesh, a place where law and order have ground to a halt, and whose residents, ruined by a chain of bankruptcies, have fallen under the spell of a malevolent crime boss with powerful political connections to the IRA.
Out of his jurisdiction, out of his claustrophobic cottage and out of his comfort zone, Daly is plunged into a shadowy border world of desperate informers, drunken ex-cops, freelance intelligence agents haunted by their own reflections and violent smugglers.
Doomed to be kept on the fringes by two separate police forces working in parallel, Daly’s dogged search for the truth soon sparks an outbreak of murderous violence as the desire to keep the Irish border in the shadows intensifies.
The Spirit of the Irish Border
– A Guest Post by Anthony J Quinn
Although Undertow is a contemporary crime novel with shades of a spy thriller, it was motivated by a quest to understand the spirit of place along the Irish border, where I’ve lived most of my life. Sometimes the most unexplored landscape — as deserving of attention as any far flung destination — is the terrain closest to home. I wanted to take on the countryside I had grown up in and loved, and do justice to its moods and physical beauty, its interweave of darkness and light, which I find constantly mesmerizing.
The Irish border itself has always been more than a geographical line. It’s a part of my collective identity, and also a window into the soul of a country and its troubled history, existing as something much more restless and porous than a static barrier. Part of the reason lies in the border’s higgledy-piggledy nature; there are no straight lines or sharp demarcations along its 310 miles. On the map, it resembles a parody of a border, a drunken scrawl through the counties of Ulster, a riddle in the landscape, following the meandering lines of rivers and tracts of bogland and mountains.
A lot of Irish crime fiction seems to be based on the belief that the genre functions best in an urban setting. However, the rural Ulster landscape I’m trying to describe is as richly textured as any cityscape. The border backdrop of my books is not a vast and unpopulated wilderness. It’s a landscape compacted out of the generations that went before, and full of their mysterious presence; a claustrophobic stage into which too many competing tribes have been crammed, where the past lies cheek by jowl with the present, and where every thorn tree or rock has its own ghost, its own dreadful story to tell.
In Undertow, my detective, Inspector Celcius Daly, comes to realise that in the world of organised criminal gangs, there are no borders any more, just gathering points for smuggling operations and predators, a hunting ground full of violence and betrayal, and that in the context of Northern Ireland and the Republic of Ireland, if there is a true, indelible border, then it runs between the two forces of law and order, the Garda Siochana and the Police Service of Northern Ireland, two forces separated by red-tape and bureaucracy. The border’s disorientating track has spawned a host of crimes in its wake; fertile ground for violent gangs and authors to exploit.
Praise for Anthony J Quinn
This should make Quinn a star, for it is unquestionably one of the crime novels of the year’
DAILY MAIL
‘Beautiful writing about ugly events with a plot that’s pleasingly serpentine.’
SUNDAY TIMES
‘Beautifully written… a novel that demonstrates how capacious the crime fiction genre can be.’
THE INDEPENDENT
About the Author

Anthony J. Quinn is an Irish author and journalist, born in County Tyrone and studied English at Queen’s University, Belfast. His first novel, Disappeared, was a Daily Mail crime novel of the year.
BUY LINKS
AMAZONUK  |  AMAZON US  | GOODREADS