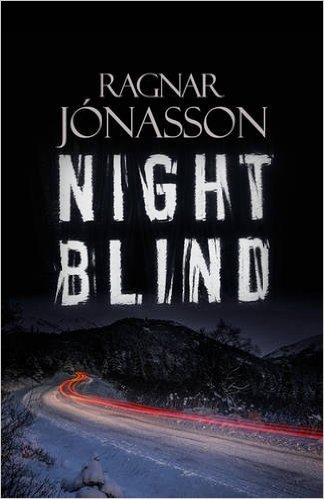 Ari Thór Arason: a local policeman, whose tumultuous past and uneasy relationships with the villagers continue to haunt him.

The peace of this close-knit community is shattered by the murder of a policeman – shot at point-blank range in the dead of night in a deserted house.

With a killer on the loose and the dark arctic winter closing in, it falls to Ari Thór to piece together a puzzle that involves tangled local politics, a compromised new mayor, and a psychiatric ward in Reykjavik, where someone is being held against their will. Then a mysterious young woman moves to the area, on the run from something she dare not reveal, and it becomes all too clear that tragic events from the past are weaving a sinister spell that may threaten them all. Dark, chilling and complex, Nightblind is an extraordinary thriller from an undeniable new talent.
Review
Today I am posting my review of Nightblind, the second novel from Icelandic author, Ragnar Jonasson’s Dark Iceland series
Nightblind picks up a few years after Snowblind(Jonasson’s debut novel and the first book in the Dark Icelandseries). Ari Thór is still working for the Siglufjörður police force. Having missed out on a promotion, he is now working for Herjólfur. Back in a somewhat uneasy relationship with his girlfriend, Kristin, Ari Thór is now father to a little boy, Stefnir.
As the story commences, Ari Thór is bed-ridden with the flu leaving Herjólfur to work another shift alone. When Herjólfur is called to a deserted house on the edge of the town, disaster strikes and Ari Thór finds himself hauled from his sick bed to investigate a shooting. Carrying out an investigation within a tight-knit community is not easy for outsider Ari Thór and he calls upon his former boss Tomás to help out. Gun crime is unheard of in Iceland and Siglufjörður certainly seems to have a surprisingly high crime statistics for a small, isolated town in a country known for its low crime rates!
Siglufjörður remains as bleakly beautiful as I remember from the earlier Snowblind. With winter providing 24 hours of icy darkness, it provides the perfect setting for a Nordic noir.
The story is told from several points of view, interspersed with pages from a diary of a psychiatric patient written decades previously. This adds to the mystery and tension as the reader is left to wonder who that writer might be and how he fits into the tale.
The plot is well crafted and the story well-told. The reader is gradually provided with clues and information which ensures that the suspense builds as the mystery is unhurriedly laid out before us. As the layers are slowly peeled back, both from the past and from present day, we are left with a complex mystery centred around family secrets and local politics. I suppose that secrets and scandals linger longer in tight-knit rural communities than they would in the more anonymous setting of a larger city.
Jonasson has quickly shown himself to be a master of storytelling. From the evocative prose to the enthralling twist and turns, Nightblind is a convincing and engaging tale from a series that just keeps on getting better and better. A satisfyingly complex mystery that I would highly recommended for fans of Nordic noir and crime thrillers.
About the Author

Ragnar Jonasson is author of the international bestselling Dark Iceland series. His debut Snowblind, first in the Dark Iceland series, went to number one in the kindle charts shortly after publication. Ragnar was born in Reykjavik, Iceland, in 1976, where he works as a lawyer. He also teaches copyright law at Reykjavik University and has previously worked on radio and television, including as a TV-news reporter for the Icelandic National Broadcasting Service. Ragnar is a member of the UK Crime Writers’ Association (CWA) and recently set up the first overseas chapter of the CWA, in Reykjavik. He is also the co-founder of the Reykjavik international crime writing festival Iceland Noir. From the age of 17, Ragnar translated 14 Agatha Christie novels into Icelandic. He has appeared on festival panels worldwide, and lives in Reykjavik with his wife and young daughters.