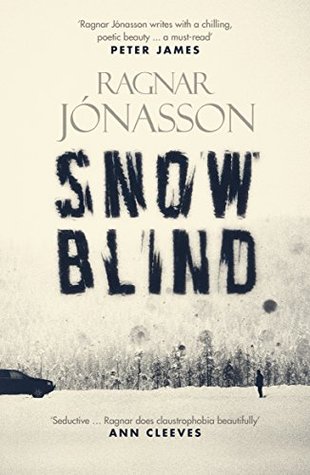 Title: Snowblind
Author: Ragnar Jonasson
Publisher: Orenda Books
Publication Date: 20 April 2015
Twitter: @ragnarjo
Website: http://www.ragnarjonasson.com/
Rating: 4.5 out of 5
Blurb
Siglufjörður: an idyllically quiet fishing village in Northern Iceland, where no one locks their doors – accessible only via a small mountain tunnel.
Ari Thór Arason: a rookie policeman on his first posting, far from his girlfriend in Reykjavik – with a past that he’s unable to leave behind.
When a young woman is found lying half-naked in the snow, bleeding and unconscious, and a highly esteemed, elderly writer falls to his death in the local theatre, Ari is dragged straight into the heart of a community where he can trust no one, and secrets and lies are a way of life.
An avalanche and unremitting snowstorms close the mountain pass, and the 24-hour darkness threatens to push Ari over the edge, as curtains begin to twitch, and his investigation becomes increasingly complex, chilling and personal. Past plays tag with the present and the claustrophobic tension mounts, while Ari is thrust ever deeper into his own darkness – blinded by snow, and with a killer on the loose.
Taut and terrifying, Snowblind is a startling debut from an extraordinary new talent, taking Nordic Noir to soaring new heights.

Review
I have been terribly remiss in posting my reviews for Ragnar Jonasson’s ‘Ari Thor’ series. However, having just started the 4thbook in preparation for the blog tour, I thought that this would be the perfect time to post my reviews of the 3 earlier books. So, here’s the first review…
Snowblind is the debut novel from Icelandic author Jonasson and first in the Dark Iceland series centred around newly qualified policeman, Ari Thor, and the northern fishing village of Siglufjordur.
The setting for the novel is claustrophobic and not a little oppressive. Siglufjordur is a small, isolated community where all the residents know each other and view strangers with suspicion. In the depths of winter, the sun doesn’t rise and the village is virtually cut off from the rest of the country due to the hazardous mountain roads. An eerily atmospheric setting for a death…
I found Ari Thór Arason to be an engaging and likeable protagonist. Hailing from Reykjavik, Ari Thor finds it difficult to fit into the local community. Having impulsively accepted a job that meant leaving his girlfriend, Kristin, behind, he quickly starts to doubt the wisdom of his decision.  When he meets the pretty Ugla their burgeoning friendship, at a time when his own relationship is on shaky ground, simply adds to Ari’s confusion and guilt. Ari Thór is certainly not without fault, yet this make him real and believable as a character.
Ari is soon distracted from his personal problems by the death of an old writer, Hrolfur Kristjansson. What initially appears to be a drunken accident quickly becomes the subject of a possible murder enquiry. Add to the mix a women found unconscious in the snow,  a late night intruder and an avalanche cutting off the village from the rest of mainland Iceland, Siglufjordur may not be quite the sleepy village that Ari initially thought.
The plotline puts me somewhat in mind of traditional murder mysteries, a literary version of Cluedo. We have a murder, a limited number of suspects trapped in a specific location and well thought-out clues which lead the reader on their own path to revealing ‘whodunnnit’. I understand that Jonasson has translated a number of Agatha Christie novels into Icelandic and I can see that he may well have been influenced to some degree by her writing, albeit Jonasson’s writing has a much darker and grittier edge to it, typical of the ‘Nordic Noir’ genre. There is a subtleness to the mystery that quietly grips the reader until the very last page.
I very much liked the style of writing throughout the book. Jonasson cleverly switches view throughout the story and manages to do so without giving the story a disjointed feeling. This allows the reader to view the story through different eyes and encourages the tension to gradually build as the investigation progresses.
I thoroughly enjoyed Snowblindand Jonasson has jumped straight to the top of my list of favourite authors. The story is complex, claustrophobic and captivating (all the C’s!), a real page turner. The plot is well-crafted, the characters interestingly complex and the story is, quite simply, absorbing. I would  recommend this to fans of crime thrillers.
About the Author

Ragnar Jonasson is author of the international bestselling Dark Iceland series.
His debut Snowblind, first in the Dark Iceland series, went to number one in the Amazon Kindle charts shortly after publication. The book was also a no. 1 Amazon Kindle bestseller in Australia.
Snowblind was selected by The Independent as one of the best crime novels of 2015 in the UK.
Books in the Dark Iceland series have been published in the UK, Germany, Poland and Iceland, and rights have also been sold to the USA, France and Italy.
Ragnar was born in Reykjavik, Iceland, where he works as a writer and a lawyer. He also teaches copyright law at Reykjavik University and has previously worked on radio and television, including as a TV-news reporter for the Icelandic National Broadcasting Service.
Ragnar is a member of the UK Crime Writers’ Association (CWA) and recently set up the first overseas chapter of the CWA, in Reykjavik.
He is also the co-founder of the Reykjavik international crime writing festival Iceland Noir.
From the age of 17, Ragnar translated 14 Agatha Christie novels into Icelandic.
Ragnar has also had short stories published internationally, including in the distinguished Ellery Queen’s Mystery Magazine in the US, the first stories by an Icelandic author in that magazine.
He has appeared on festival panels worldwide, and lives in Reykjavik with his wife and young daughters.
Buy Links
Amazon UK | Amazon US | Goodreads