Today on the blog we’re celebrating the release of Jackie Kabler’s second novel The Deadline.  I loved the book and will be posting a review very shortly. In the meantime, however, have a read of our interview with the author and don’t forget to enter the giveaway at the end of the page!

Blurb
Cora Baxter is back – and this time, she’s facing the most important deadline of her career…
When TV reporter Cora Baxter attends the scene of a murder in a London park, she’s horrified to discover the victim is someone she knows – and devastated when one of her best friends is charged with the crime. Suddenly the fun-filled life of Cora and her eccentric camera crew takes a darker turn. Cora is convinced that her friend is innocent, but with seemingly solid evidence, the police investigation team – reluctantly led by Cora’s boyfriend DCI Adam Bradberry – believe the case is closed. With a trail of clues that leads all the way to New York, can Cora find out the truth before the trial begins – or is it already too late?

Jackie kindly agreed to a Q&A so that our readers can learn more about her and about The Deadline.

1. What can we expect from The Deadline?

The Deadline is the second in my light-hearted murder mystery series set in a TV newsroom – the Cora Baxter Mysteries. It’s a standalone story, and starts with Cora, who is a TV news reporter, being called out to the scene of a murder in the middle of the night. When she arrives, she’s horrified to discover she knows the victim, and then she’s devastated a few days later when one of her closest friends is charged with the crime. Her friend vehemently denies being a killer though, so Cora decides she needs to find out the truth before the trial begins. So it’s a novel with crime at its heart, but there is some humour and romance in it too. It’s not a gritty, hard-core crime novel!

2. What did you find the most challenging about writing The Deadline?

I think it was that “scary second novel” thing I’d heard about! My first book became a bestseller for my publisher Accent Press, and made it to number two on the Amazon crime chart. So the pressure is on to make this one as good, if not better, which is really nerve-wracking. It helped that it was the second in a series, so I didn’t have to create every character from scratch. But I tried to take on board constructive criticism I had about my first book, without changing the essence of my writing style. I thought I wouldn’t be as nervous about publication day this time round, but I was wrong – I suspect that will never change!

3. Where did you get your inspiration for Cora Baxter – are there any similarities to yourself?

Cora’s a TV news reporter, which was my job for twenty years, so obviously I took a lot of inspiration from that job and that lifestyle. There are definitely a few similarities to a younger me, but she’s not me really! She drinks Earl Grey tea like me, loves wine like me (!) and has a solid group of friends and colleagues who mean the world to her, just like I do. But her love life is a lot more exciting than mine ever was, and I’m not sure I’d make the same decisions as she does in some situations. I do like her though.

4. Who is your favourite character from the book to write and why?

5. If you had to cast actors to play Cora and DCI Adam Bradberry in a movie version of the book, who would you choose?

This changes all the time (yes, I do think/dream about it!). At the moment though I think Sheridan Smith would be a great Cora. As for Adam, I think it might have to be Michael Fassbender. I’d have to audition him personally to make sure though. Maybe more than once. Possibly over dinner…

6. How many books are you planning for the Cora Baxter series or is this unknown as yet?

I was very lucky to have been given a three-book deal by Accent Press so there will definitely be three. But I could write more if necessary. Cora has years of news reporting ahead of her yet, and I have plenty of material in my head!

7. When writing the book, did it ever take a different path to what you initially intended or did you have the plotline all fully mapped out before the writing started?

I’m definitely a planner, and like to have a full outline before I start writing a book properly. But then this really weird thing happens – the characters start doing and saying things you don’t expect, and you end up going off on little tangents, some of which develop into new plot lines. So it’s a bit of both I think – a planned novel, which ends up being slightly different to what I intended!

8. When looking back over your experiences of being a published author, what has been your favourite moment to date?

I think it was the first time I saw my book on a shelf in a book shop. It’s something I had dreamt about for so long, and it was quite overwhelming. But there have been so many favourite moments – my first five-star review, appearing at my first literary festival, complete strangers telling me they loved my book. It’s a truly wonderful thing and I feel so privileged to be a published author.

9. How do you plan to celebrate the publication day for The Deadline?

With a three-day celebration! Publication day is on a Thursday so it will just be champagne and pizza at home in Gloucestershire (I know how to live, eh!). On the Friday I will be “writer in residence” for the day at a Cardiff bookshop, followed by going out for dinner. And on the Saturday I’ll be in London, having a lovely afternoon with some fellow authors and fabulous book bloggers (you included, Kirsty!), after which my husband is taking me out for a meal. I think I’ll spend the Sunday mostly lying down…

10. If you were to dabble in a genre that you haven’t ventured into before, which genre would you choose?

My Cora Baxter books are sort of cross-genre really – best described as a mix of rom-com and crime. But I’ve recently had an idea for a psychological thriller and I really want to write that at some point. I’d quite like to leave the humour and romance behind for a while and try something a bit darker.

11. Do you get much time to read yourself? If so, do you have any favourite books or authors? Do you have one book that you would recommend to everyone?

I don’t get a lot of time to read actual books – I have a full time TV job as well as my writing career, so reading is mainly on holiday or for ten minutes in bed before I fall asleep. But I’m a fanatical audiobook listener, as I have a five-hour round trip drive to work in London. I’ll listen to anything really but my favourite genre is definitely crime. Give me an Ian Rankin, Harlan Coben, Tess Gerritsen or Linwood Barclay novel and I’m happy. But I always recommend Iris Murdoch’s The Sea, the Sea. It’s just such a beautifully written book – her descriptions of the ocean are breath-taking.

14. Favourite chocolate? – Cadbury Golden Crisp. It’s widely available in Ireland but really hard to get in the UK. I always stock up when I visit my family in Ireland!

18. Reading: eBook or physical book? – Physical. I have a Kindle but I don’t use it very much.

19. What’s coming next for your readers or is that top secret for now?

I’m working on the third Cora Baxter Mystery. It’s pencilled for release in November 2017 and it’s called The Development. That’s all I can say for now!

Huge thanks to Jackie for taking the time to speak to us and answer a few of our questions!

Now, before you leave this page, don’t forget to enter the competition below… 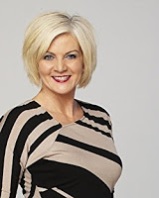 Jackie Kabler worked as a newspaper reporter and then in television news for twenty years, including nearly a decade on GMTV. She later appeared on BBC and ITV News, presented a property show for Sky, hosted sports programmes on Setanta Sports News and worked as a media trainer for the Armed Forces. She is now a presenter on shopping channel QVC and has a three-book deal with Accent Press for her Cora Baxter Mysteries, a series of murder mysteries set in a television newsroom.

This giveaway is for 2 signed copies of Jackie’s books, a Nails Inc nail polish set and a cosmetics bag. Open internationally. Starting on the 29th and ending on the 6th.