I’m delighted to be today’s stop on the blog tour for Cinema Lumiere by Hattie Holden Edmonds.

What if someone had secretly made a film of your life? Hannah Bailey has resigned herself to a dead-end job, she’s sealed her heart against love and her catastrophic thinking is out of control. In fact, she’s hard pushed to find a single reason for her existence until the day she stumbles across a tiny one-seated cinema and its mysterious French owner Victor Lever… Cinema Lumière doesn’t screen Hollywood blockbusters or even low budget arthouse indies. Instead it shows people films of their lives. But how does Victor create such unique biopics and why is he so determined to coax Hannah into that single red velvet seat?

Set between the bustling streets of both Portobello and Paris, Cinema Lumière turns a literary projector on the timeless experiences of love and loss. If you liked The Time Traveller’s Wife and One Day, this could well be the book for you.

Nominated for The People’s Book Prize 2016 in the Summer Fiction collection, this is the charmingly original tale of Hannah Bailey.

Hannah lives in London with her little bull dog, Nellie. She has a dead-end career writing articles for a health magazine – not quite the direction she anticipated her career going.
Then one day, she bumps into her old friend Victor and he invites her to watch a film that he has made. However, the cinema contains but one red velvet chair and the film being shown is not just any film but one uniquely angled towards Hannah’s own life. Watching the film sends Hannah’s emotions into freefall, forcing her to face up to feelings that she has locked away for so long. How does Victor know her life so thoroughly?  Although Hannah flees from that showing in a panic, she cannot get Victor and his little cinema out of her mind…
It is quite difficult to pinpoint precisely what Cinema Lumiere is about as there are several threads to the story. However, the overall theme to me was about relationships.  The story flits between two timelines – the past and the present – tracing Hannah’s relationships with different men in her life. Through those memories we learn how Hannah’s past relationships have shaped her current life.
The most complex of those relationships being that with the old Frenchman, Victor. Theirs was an odd friendship (because of their age difference) built on a mutual love of old films and cinema. Having not seen each other for years, there is definitely more to their story and as the story progresses, the layers of secrecy are slowly peeled away until the reader can understand their friendship better.
I felt that the characterisation within Cinema Lumiere was very well crafted, with the characters all being very real and likeable. Hannah is an interesting and likeable protagonist, and a good narrator. I felt a real interest in her story.
Nellie, the British Bull Dog, is by far my favourite supporting character. She adds a sense of fun to the story.
Hannah’s new colleague, Ian, was another favourite of mine. Initially shy and reserved, he is hugely endearing and their working relationship also adds an element of fun to the story, contrasting well with the more serious nature of her private life.
There is also the addition of potential love interest, Joe. Hannah’s past romantic life has not proved straightforward and things do not seem to have become any less complicated, however Joe is an appealing character and I enjoyed reading about the development of their friendship/relationship. The story shows us that love is a risk, but that it is one worth taking.
I felt that the book had quite a dreamy and romantic undertone that was not necessarily due to the potential romance between Hannah and Joe, but rather an overall sense of love towards the things that make our lives so uniquely special, however big or small. In Hannah’s case, that ranges from the people in her life to her beloved Nellie to her love of London. It is easy to become complacent or cynical and to forget about the romance that life holds.
I found Cinema Lumiere to be quite a thought-provoking and poignant tale, with a couple of twists guaranteed to pique the reader’s interest. The complex story certainly left me with a number of questions, the type of which I am happy to accept that I will not receive an answer to. The tale reminds the reader that we are the sum of our past experiences and that we should learn to let go of any disappointments and to welcome those lessons learnt that allow us to move forward.
Cinema Lumiere is an impressive debut from Hattie Holden Edmonds. I look forward to seeing what comes next from this author.
About the Author

Hattie Holden Edmonds was the in-house writer at Comic Relief for three years, working on projects with amongst others, Richard Curtis, Sacha Baron Cohen and Armando Iannucci. Before that she was a music journalist for the German music magazine Bravo. Cinema Lumière is her debut novel. She also writes a weekly blog for the Huffington Post on all things bookish. Check her website at http://www.hattieholdenedmonds.com/
Hattie Holden Edmonds has held down a variety of jobs including junior assistant on Separates in Clements department store, chief plugger-in of cables in a Berlin recording studio, hat-maker and a very clumsy waitress in an ice cream parlour. Apart from writing, she teaches meditation at a palliative care unit in Ladbroke Grove, and runs a part time and very rickety cinema from a fisherman’s shack in Whitstable. She loves a good swim, and dreams of being able to knock up a decent three course meal.
Buy Links
Amazon UK | Amazon US | Goodreads | Waterstones
Don’t forget to check out the previous or upcoming blog tour stops, as listed below! 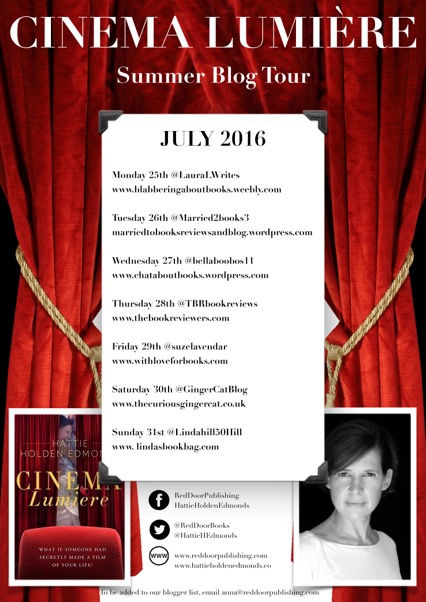