FACT is stranger than FICTION on the front line…

Why do police like big busts?
How can a priest assist in a violent robbery?
When does Hitler figure in police negotiations?
Why can making mashed potato get you arrested?
When do police deploy the banana phone?
What happens when you die if CSI don’t like you?
Come on patrol with PC Donoghue and discover the funny, interesting and bizarre side of life on the front line of British policing. Police, Arrests & Suspects is the third fascinating account of a front line police response officer in ‘The True Story of a Front Line Officer’ series. John’s books remain hugely popular today, with over 600 5-star Amazon reviews combined.
WARNING: Contains Humour & Traces of Nuts

Many thanks to the author, John Donoghue, for providing a review copy of Police, Arrests & Suspects.
This is a non-fiction book reciting some of the author’s own experiences as a police officer and, particularly, focusing on some of the funnier and/or stranger situations he has found himself in.
The book is split into 17 chapters, each with eye-catching titles and each chapter containing its own standalone story. I took my Kindle to work and limited myself to one chapter a day during my lunch hour – a great interlude during a busy working day.
It’s difficult to pick a favourite story, however I think mine was either the drunk driver from the first chapter or possibly the drug bust in chapter 14.
Whilst being an upbeat and amusing book, there are a few more serious tales such as the child neglect in chapter 2 and the shocking time wasters in chapter 12 for whom the word ‘emergency’ obviously has a different meaning when making the decision to call 999!
The book does at times border on the ridiculous, however it is great fun and a thoroughly engaging read. I found myself laughing out loud on occasions, whilst simultaneously feeling slightly guilty as some of the situations probably aren’t really a laughing matter. The author certainly knows how to tell a tale, seeing the humour in most situations.
Police, Arrests & Suspects give the reader a glimpse into the (sometimes bizarre) life of a police officer through a light-hearted selection of stories. The prose has an easy flow and a friendly/chummy style, which left me feeling as though the author is telling the reader a few tales over a beer in his local. Overall, a humorous and very entertaining read.
About the Author 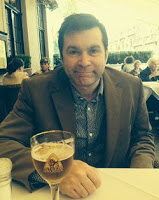 John Donoghue never set out to be to be a writer … he wanted to be a sailor …and a soldier …and a policeman.
When he left school, he ran away to sea …or more accurately, caught the train and joined the Royal Navy. After six years on the high seas, he transferred to the Army, serving Queen and Country throughout the Cold War.
However, when it began to thaw, he took this as his cue to move on. Leaving the army as a Captain, he joined an international security organisation although it was more budgets and spread-sheets than James Bond and Pussy Galore.
Bored, and in search of more fun and excitement, he handed back his company car, expense account and keys to the executive toilets and joined the police force where he is currently a serving police officer.
He soon found out that FACT is stranger than FICTION in the police, and has written three books so far about the bizarre, funny and interesting side of the service in the ‘The True Story of a Front Line Officer’ series:
‘Police, Crime & 999’
‘Police, Lies & Alibis’
‘Police, Arrests & Suspects’
The police books have won the coveted People’s Book Awards – voted for by members of the public.
Genre: Police, Humour, True crime, Autobiography
His humorous tales of military service & travels around the bizarre named places in Britain with his dog (Anyone been to Twatt, Pity Me or Wetwang?) are contained in:
‘Shakespeare My Butt!’
Genre: Humour, Military, Travel, Autobiography (NOTE: make sure you get the updated version with Che Sweep on the cover). It was infamously described in a review as ‘Bill Bryson on magic mushrooms’.
Buy Links
Amazon UK | Amazon US | Goodreads