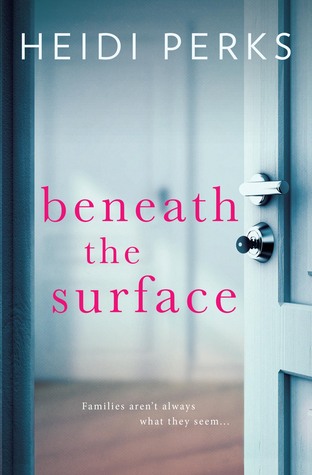 I donʼt know where you are…
I donʼt know what Iʼve done…
Teenager Abigail Ryder is devastated when she gets home from school to find her family gone.
Nothing makes sense. Things are missing from the house and her stepsistersʼ room is completely empty. But the police think sheʼs trouble, and when grandmother Eleanor tells her to forget them all and move on, thereʼs no choice other than face the future – alone.

Fourteen years on, Abi and Adam are a happy couple on the verge of parenthood. But when the past comes back to haunt Abi, the only way forward is to go back and uncover the truth – and reveal the dreadful secrets a mother has been hiding all these years.

I was provided with a copy of Beneath the Surface in exchange for an honest review.

Beneath the Surface is the debut novel from Heidi Perks and I can honestly say that it is an enthralling book.

Seventeen year old Abi arrives home from school to an empty house. Her mother and her twin two-year-old sisters have disappeared.
Fourteen years later, we meet Abi again and through a series of letters she writes to her husband and flashbacks from her mother, the reader gradually pieces together the real story as to why Abi found herself abandoned by her family and we see a number of disturbing family secrets come to light. Hers is family who must have an extra-large closet to hold all of their skeletons!
When first picking up the book, I was under the impression that it was a psychological thriller. Having read it, I’m not sure that the novel falls easily within the ‘thriller’ category, although there is certainly a huge psychological element to the story. The book is ultimately a tale of mothers and how their actions can shape their daughter’s futures.
I thought the book was well written – easy to read and interesting. The tale held my attention throughout and I think the multi-narrative format assisted with that. I wanted to understand how things had become so bad that a mother could abandon her teenage daughter and I found it very insightful to be able to view the problem through the eyes of both Abi and Kathryn, as well as the somewhat lighter-hearted chapters told from the viewpoint of the twin girls.
I felt the characterization within this highly dysfunctional family was very well-done. Perks seems to have applied an element of careful psychological profiling in order to create the complex characters featuring within the story. Abi is an intriguing protagonist and a sympathetic character, particularly as the reader learns what Abi has endured over the past 14 years. Her twin sisters, Hannah and Lauren, have very different personalities – Hannah is headstrong and determined, like Abi, whereas Lauren is much more placid and content with life. Abi’s mother, Kathryn, is over-protective and paranoid, unable to make any decisions without the approval of her overbearing mother, Eleanor.  Eleanor herself is a great character: proud, domineering, and infinitely unlikeable. She is undoubtedly the ‘villain’ of the piece!
As the different narrations start to tie together and layers are peeled back, the tension within the story increases and the reader gets the feeling that there will be a big reveal at some point in the journey. In fact, there are a number of twists and turns, some more predictable than others, and I found myself totally gripped by the story.
I don’t want to ruin the ending for anyone, however I think that it worked very well and in keeping with the overall feel of the story, rather than resorting to the usual saccharine conclusion. I found the story to be quite haunting and emotionally draining. It remained with me for several days after I finished reading it – possibly because I have a really close relationship with my mother and I could not stand the thought of her abandoning me.
All in all I thought this was a great debut from Heidi Perks. Beneath the Surface is a gripping tale – commencing in a dark and intense manner, shrouded in mystery, and ending on a glimmer of hope. It is an imaginative, emotional and complex tale of a seriously dysfunctional family and I would not hesitate to recommend it to fellow readers.
About the Author

Heidi Perks is a full-time writer and mum of two. Beneath the Surface is her debut novel and is inspired by the writing of Liane Moriarty and Rosamund Lupton, amongst others. She is a graduate of the Curtis Brown Creative Novel Writing course and studied marketing at Bournemouth University. She has since returned to the town to set up home by the sea with her husband and their two young children. Heidi’s passion for the beach and the sea always makes its way into her writing, and her happiest times are spent on the sand and in the waves with her family.
Buy Links
Amazon UK | Amazon US | Goodreads