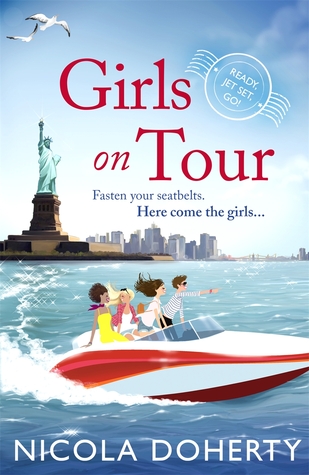 Four girls. One year.
Five fabulous destinations.
Poppy is bound for Paris, the City of Love. Could this be her chance to end her epic dry spell?
Lily is en route to her cousin’s wedding in LA, where she’s willing to break a few rules to land her dream role.

Maggie can’t wait for her romantic ski holiday in Meribel – until it goes seriously off-piste.
Rachel packs for a glamorous Roman holiday, but a blast from the past is about to sabotage la dolce vita.
The girls get together and fly to Manhattan. But someone’s been hiding a big secret in the Big Apple…
Hilarious, romantic and unputdownable, Girls on Tour is an irresistible series of interlinked stories about four ordinary girls who have extraordinary fun in faraway places. Follow them in an unforgettable year that includes breaking up, making up, new jobs and some big surprises …
Review
Thank you to Headline and Netgalley for providing me with a copy of Girls on Tour in return for an honest review.
Uniquely, this book was initially published as four separate novellas, now published together into one full-length book. I have to say, this works surprisingly well.
The first thing I noted about the book was the appealing front cover. It is fun, colourful and eye-catching. I immediately felt a longing to be on holiday having adventures of my own!
The second plus point about this story are the fantastic locations –  Paris, LA, Meribel, Rome and NY… now that would be a perfect year in holidays! Having been to all locations, with the exception of Meribel, I was easily able to imagine the backdrops for each girl’s adventure.
Doherty’s style of writing is easy and fun. She deals with all issues, both good and bad, with aplomb. Having initially been a series of novellas, this allows the book to shift focus from one girl to the next, so that the reader learns about each girl individually. The stories are linked by the recurring characters and some well-placed email dialogue between Lily and Maggie which helps to move the story along.
The girls, Poppy, Lilly, Maggie and Rachel, are very different characters each with their own charms. They are all likeable and fun. More importantly for me, the author has not been scared to explore the character’s flaws which means that as a reader, I was able to relate to/sympathise with at least one (if not all) of the characters and their woes.
Girls on Tour is an enjoyable story and contains everything necessary for a great holiday read – friendship, romance, adventure, great locations, comedy, drama and some great unexpected twists!
Fast-paced, witty and good fun – a light-hearted and feel-good read! Very entertaining and recommended for fans of chick lit/romantic comedy type books.
About the Author

Nicola Doherty grew up in Monkstown, Co. Dublin, and worked in book publishing before leaving to pursue a freelance and writing career. Her first novel The Out of Office Girl was shortlisted for the Romantic Novelists’ Association Awards in the Romantic Comedy category. Nicola lives in Highbury, north London with her husband and no cats (yet).
Buy Links
Amazon UK | Amazon UK | Goodreads﻿