Her eyes are wide open. Her lips parted as if to speak. Her dead body frozen in the ice…She is not the only one.

When a young boy discovers the body of a woman beneath a thick sheet of ice in a South London park, Detective Erika Foster is called in to lead the murder investigation.

The victim, a beautiful young socialite, appeared to have the perfect life. Yet when Erika begins to dig deeper, she starts to connect the dots between the murder and the killings of three prostitutes, all found strangled, hands bound and dumped in water around London.

What dark secrets is the girl in the ice hiding?

As Erika inches closer to uncovering the truth, the killer is closing in on Erika.

The last investigation Erika led went badly wrong… resulting in the death of her husband. With her career hanging by a thread, Erika must now battle her own personal demons as well as a killer more deadly than any she’s faced before. But will she get to him before he strikes again?

Thank you to Bookouture and Netgalley for providing me with a review copy of The Girl in the Ice by author Robert Bryndza. Bryndza is better known for romantic comedies such as the Coco Pinchard series.  The Girl in the Ice is Bryndza’s first foray into the crime thriller genre.
The storyline is interesting and easy to follow. A victim is found under the ice in a South London park. The victim proves to be from a well to-do and well-connected Slovakian family and the job is made that much harder by the powers-that-be within the police force allowing the victim’s powerful family to dictate how the investigation is ran. However, when similarities to earlier unsolved murders come to light, the team realise that they may possibly be dealing with a serial killer operating in the area and DCI Erika Foster is not one to allow sensibilities to interfere in her investigation.
Bryndza’s style of writing is detailed and effective, pulling me into the story until I was absorbed in the investigation. There are twists, turns and some very suspect characters, all of whom add to an air of darkness and anticipation as the tension gradually increases. The pacing of the story is great, allowing the investigation to progress in good time whilst still retaining hold of the reader’s interest.
The main protagonist, DCI Erika Foster, is a complex character. Widowed in a police raid gone wrong, she is difficult, impulsive and constantly flouting authority without much heed for consequences. She is not an easy character to warm to and she is certainly very frustrating at times, however I could not help but respect her. Erika is strong, tenacious and determined to catch the killer, pushing herself above and beyond what is expected and ruffling a fair amount of feathers in the process. Unfortunately, her single-minded determination to solve the case leads her to ignore her instincts and put herself in danger!
Ironically, Erika is Slovakian by birth which should aid in the investigation, however she is set apart from the victim’s family by an old-school class divide which sees her struggle to retain any sense of authority in the eyes of the victim’s family. As a reader, I found that I learned and understood more about Erika’s character as the story progresses and I get the feeling that there is still more that the author is waiting to tell us about her – a great reason to buy book #2!
Erika’s counterpart is DCI Sparks, who had charge of the case before Erika is given lead. He is surely and uncooperative, wanting to get ahead in his career by claiming the kudos that will come with solving the case. Not all of her new colleagues are as difficult as Sparks, with the rest of the team appearing much more accepting of Erika and her somewhat unusual ways. Whilst obviously not wanting to rock the boat, they seem respect the insight and deductive reasoning that their new DCI brings to the investigation.
There are a few sections within the book in which we are given a small glimpse as to the goings on from the killer’s perspective. This adds a great dimension and sense of danger to the story, whilst helping to propel the killer into three-dimensional character.
The conclusion, when it arrives, is brilliant and satisfying. A great end to a great story!
A fantastic and thrilling debut – thoroughly recommended for fans of crime thrillers and police procedurals. I really enjoyed Girl in the Ice and I can’t wait to read the second in the DCI Foster series, TheNightstalker, which I understand is due to be released on 2 June 2016.
About the Author 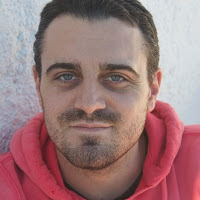 Originally from the UK, Rob lives in Slovakia with his Slovak husband and their two crazy dogs. He originally trained as an actor, but was bitten by the writing bug in his mid-twenties and hasn’t looked back.
His debut novel, The Not So Secret Emails of Coco Pinchard became an Amazon bestseller, and has grown to a best selling series of five books.
In addition to his recent number one romantic comedy, Miss Wrong and Mr Right, Rob is excited to embrace the darker side of life, and has just signed a three-book deal with Bookouture to write a crime thriller series. His debut crime novel, The Girl In The Ice has just been published.
Buy Links
Amazon UK | Amazon US | Goodreads