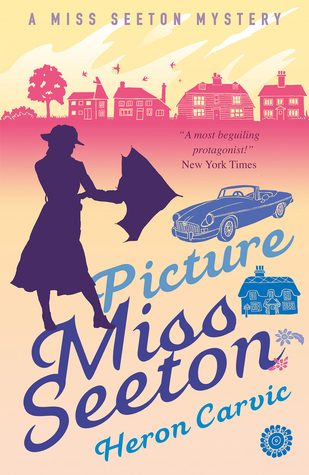 When Miss Seeton walks out of a performance of Carmen and witnesses a real-life stabbing, all she can recall is a shadowy figure. But how could even she have guessed that her latest artistic endeavour is a picture-perfect portrait of the killer? Her caricature, however, puts her in a perilous position, for back at her rustic cottage in Plummergen, she’s fated to be a sitting duck . . . for murder most foul!

Retired art teacher Miss Seeton steps in where Scotland Yard stumbles. Armed with only her sketch pad and umbrella, she is every inch an eccentric English spinster and the most lovable and unlikely master of detection.

I came across Picture Miss Seeton on Netgalley, having not heard of the book or the author previously. First published in 1968, the book was re-released on 5 May 2016 by Farrago and I must thank them for allowing me a review copy of this book.

Picture Miss Seeton is the first in the series of cosy mysteries written by British actor and author, Heron Carvic. The series tells of the adventures of a retired art teacher, Miss Emily Seeton. The Miss Seeton series is described as being a gentle parody of Agatha Christie’s Miss Marple and I would wholeheartedly agree with that description.

Miss Seeton is a charming protagonist, non-nonsense and very logical. She is a former London art teacher and spinster, with a slight psychic ability that exposes itself through her drawings. Despite her advancing age, she is a new convert to yoga and has an incredible ability to bounce back from whatever befalls her. Genteel, insightful but naïve and not a little bit featherbrained, Miss Seeton is never without her trusty umbrella which both gets her into troublesome situations and, more often than not, saves her from befalling an even worse fate during those same incidents. A truly impressive accessory!
The story begins as we see Miss Seeton using her umbrella to prod a dangerous criminal during the act of committing a murder in London! She then sets off for the seemingly peaceful town of Plummergen where trouble follows. She finds herself the focus of numerous plots and ploys as some dangerous villains spend an inordinate amount of time and resources trying to do away with Miss Seeton. She finds herself embroiled in murder, drug trafficking and a lot of mayhem – a harsh introduction to the darker side of life.
Miss Seeton may seem like a harmless little old lady, but criminals beware – this is a lady to fear and cross her at your peril!
Inspector Delphick and his side kick Sergeant Bob Ranger, travel from London to Plummergen to solve the crime. They find themselves both bewildered and amused in equal measures by Miss Seeton and her uncanny knack of getting herself into and out of trouble on such a regular basis. I enjoyed this partnership and very much liked these two characters. The other supporting characters are mostly made up of the villagers, all of whom seem to be perfectly placed within the story and assist in their own ways in moving the plot along. There is Reverend Treeves and his sister, Sir George, Lady Colveden, Nigel, Angela, Erica Nuttel and Norah Blaine and the unusual Mrs Venning and, of course, the slimy Mr Trefold Morton and the villainous César Lebel – an eccentric and varied cast of characters guaranteed to keep the reader amused.
I am happy to report that I greatly enjoyed Picture Miss Seeton. It’s an old-school mystery with a lot of humour and bit of intrigue – a thoroughly pleasing tale with a lovely homely feeling to it. I cannot wait to read the next in the series. I could certainly see this book/series being adapted for TV.

Heron Carvic (21 January 1913-9 February 1980) was a British actor and writer who provided the voice for Gandalf in the BBC Radio version of The Hobbit, and played Caiphas the High Priest every time the play cycle The Man Born To Be King was broadcast.

Further books nominally in the Miss Seeton series were then written under two other pseudonyms. Roy Peter Martin as “Hampton Charles” wrote three novels which were all released in 1990. Sarah J. Mason, writing under the name of Hamilton Crane, then took up the series writing 14 books in all, some of which are still in print. Mason’s books modify Carvic’s characters so much that only the names will be recognisable to readers of the first five books.