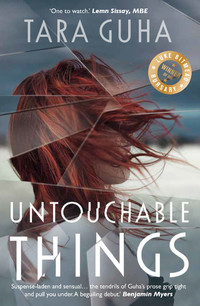 Today is my turn on the blog tour for the fantastic Untouchable Things by Tara Guha. Please keep reading and don’t forget to check out the other stops on this tour from some of my fellow bloggers, schedule as listed below. 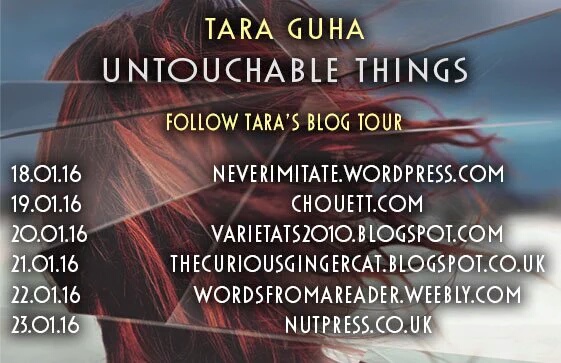 For the third time this week he is watching her scream.

Rebecca Laurence is centre stage and shining in her role as Ophelia. She pivots, rotating like a ballerina impaled in a musical box, red hair cascading down her back. Amidst the thundering applause, one man is watching.


Rebecca meets the charismatic Seth Gardner, and as attraction grows between them, he invites her to join his Friday Folly, a group of artistic friends. But as Rebecca is drawn into the web of tangled relationships all is not as it appears. The scene is set for the night that will rip the group apart.

Consumed by loss and surrounded by secrets, Rebecca must escape the grip of the Folly to have any chance of saving herself. Meanwhile, one man continues to watch.

Review
Untouchable Things, the debut novel from Tara Guha, is one of the most unusual books that I have read in a long time. A complex and chilling psychological/suspense thriller told in a unique manner.
The story commences during a theatre production of Hamlet. As Rebecca is centre stage performing the role of Ophelia, someone is watching her from the shadows…
The book has a unique structure. Rather than chapters, the book is split into Acts and Scenes as in a play. The switch from one character to another will commence with an excerpt from a police interview, including the specific character’s response, followed by some story-telling in a more traditional manner. There are even a few sections where part of a scene is told in a script format. The unusual format leaves the reader in little doubt that the book is merely setting the scene for a shocking event that is still to come. It also proves to be an effective way of moving the story forward and providing necessary background information that would not sit comfortably within the main prose.
I can certainly imagine Untouchable Things working well as a stage production as the book is really a character study rather than an event-filled tale. The style actually reminded me ever so slightly of a classic crime novel.
Seth Gardner is the protagonist, a handsome, wealthy and charismatic man. Having no need to work for a living, he makes it his mission to live life to the full and surrounds himself with a group of arty acquaintances, providing them with an opportunity to talk to like-minded people and inviting them to join him at his ‘Friday Folly’ gatherings where their individual talents are celebrated amongst the small close-knit group. Seth has a way of making each member of the group flourish under the warmth of his attention. He is able to fill their grey, mundane worlds with colour and excitement.
Each character initially finds friendship and acceptance within the group, becoming part of an exclusive clique with Seth at the epicentre. Their lives revolving fully around his wants and needs, having no room for other friends or relationships. They are so caught up in his spell that they do not comprehend how completely their lives are being manipulated and staged by the enigmatic and narcissistic Seth. It takes a while until they start to realise the limits of their friendships.
The characters are all, to some degree, “lone wolves” and it is this characteristic which makes them susceptible to Seth’s charms. He lets little of himself be known, yet feeds off his own carefully selected cast of characters:-
After a slow initial chapter, the writing quite simply pulled me in. The prose is dark, intense and alluring, making me reluctant to put the book down.
The reader is aware from the very first scene that something serious has happened, however we do not find out what that event is until nearing the end of the book. It is a slow reveal which means that the reader has to invest in the book before they understand what the story is really about! I liked that air of mystery and it was for that reason that I had to keep reading. I needed to know more.
Just as I was on the verge of becoming frustrated with the ongoing vagueness/air of mystery, an event occurs that shakes the group to their core. It proves to be the catalyst for them taking a hard look at Seth and recognising that he may not be quite as he appears. The group realise how little they all really know about each other and, more importantly, how little they really know about Seth. How could they have spent so much time with this one man, yet still have no real idea as to who he is? Some in the group are quick to believe the worst of him, whereas others in the group struggle with the realisation that the Seth they know and hero-worship may only be an illusion and that someone very dangerous could be lurking beneath that charismatic mask.
This story is, in essence, a fantastic character study. We learn about each character from the outside in, peeling back the layers until we know their demons and understand their pain. We learn what makes them susceptible to Seth’s influence and why they each find him so addictive.
This is a truly Machiavellian tale of wealth and seduction of mind. A dark tale of manipulation and illusion. A tense story that will both beguile you and leave you chilled to the bone. Untouchable Things is a very clever tale; dark, suspenseful, alluring and sensual, with an ending that leaves you exhausted whilst simultaneously making you want to scream for more.
My only possible criticism is that there may have been too many issues that remained unexplained by the end of the story. I would have liked to be able to tie up a few more loose ends. However, I have a suspicion that if all those issues were neatly concluded, the book would not have the quite the same level of intrigue and suspense that makes it so utterly enthralling .
Overall, an absolutely fantastic debut and likely to remain one of my top reads of 2016!

Tara Guha was born to an Indian father and English mother and spent her childhood in the Ribble Valley, passing many a wet day writing poetry and music. After studying English at Cambridge she embarked on a career in the classical music industry in London, promoting artists including Placido Domingo, Paul McCartney and Dudley Moore. Over the years she has also been a freelance journalist, charity worker and has trained as a counsellor.

Tara won the Luke Bitmead Bursary 2014 and her first novel, Untouchable Things, will be published on 1 September 2015. She is also a keen amateur pianist, singer and song-writer and lives in the hills of West Yorkshire with her partner and two daughters. The question she is asked most is “Where are you *from*?” She still hasn’t quite worked out how to answer that one.