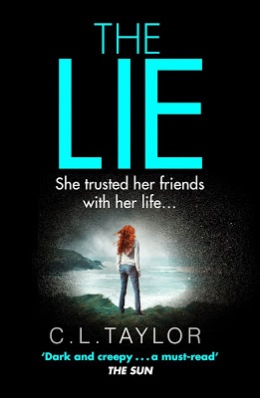 This was no accident…
Haunting, compelling, this psychological thriller will have you hooked. Perfect for fans of Gone Girl and Daughter.
I know your name’s not really Jane Hughes…
Jane Hughes has a loving partner, a job in an animal sanctury and a tiny cottage in rural Wales. She’s happier than she’s ever been but her life is a lie. Jane Hughes does not really exist.
Five years earlier Jane and her then best friends went on holiday but what should have been the trip of a lifetime rapidly descended into a nightmare that claimed the lived of two of the women.
Jane has tried to put the past behind her but someone knows the truth about what happened. Someone who won’t stop until they’ve destroyed Jane and everything she loves…
Review
I received a copy of The Lie from Netgalley and Avon for review purposes.
The story follows the life of Jane Hughes. She has a peaceful life working in a local animal sanctury in a small town in Wales. However, Jane has a secret that she has been hiding from everyone for five years, when a holiday with friends turned into a tragic nightmare. That secret comes back to haunt her when she receives an anonymous note indicating that someone knows her secret…
The book flits between Jane’s current day story and that of the events five years earlier.  C.L. Taylor cleverly peels back the layers, unveiling the events that occurred on that holiday, whilst at the same time allowing us to get to know Jane and to sympathise with her current predicament.
The story is terrifying in the way that it takes the normal concept of a girly holiday and imposes a dark and menancing outcome on that event. The story shows how seemingly good people can be manipulated and that hazy line between good and bad. Can we really trust anyone completely? Is everyone capable of being manipulated? It is more menacing in the fact that the events could easily occur in ‘real life’.
The characters are believable and realistic. We have Jane/Emma, who is sensible and straightforward; Daisy, the man-crazy free spirit; Al ,the heart-broken lesbian; and Leanne, edgy and jealous of other’s friendships. They are an eclectic mix, which leads to several instances of friction and bitchiness within the group. The story cleverly explores friendships and how petty misunderstandings and jealousy can cause those friendships to quickly sour, a very realistic situation when putting a group of girls together in close proximity for a prolonged period. It was interesting to see how the author played on the dynamics within the group, exploring the issues of jealousy and envy, as well as trauma, trust and moral character.
The story has some lovely settings, in small town Wales and in the Nepalese mountains, however the reader will most likely view these destinations though different eyes in light of the contents of the tale.
The Lie was a well-written and truly gripping book. Fast-paced and thrilling, it was creepy and terrifying in places, full of atmosphere and tension and leaving me feeling exhausted once it was over. I can’t really say much more without revealing spoilers, however I thought it was a fantastic example of a solid psychological thriller and I am not surprised that it flew straight onto the bestsellers lists!
After reading The Lie, I am very keen to get my hands on her earlier book, The Accident, and I’m hoping that there will be another book on the way shortly.
Buy Links
Amazon UK:  Kindle – http://www.amazon.co.uk/dp/B00OXH8BHK
Paperback – http://www.amazon.co.uk/dp/0007544278
Amazon US:  Paperback – http://amzn.com/0007544278
About the Author

CL Taylor lives in Bristol with her partner and young son. Born in Worcester, she studied for a degree in Psychological at the University of Northumbria, Newcastle then moved to London to work in medical publishing as a sales administrator. After two years she moved to Brighton where she worked as a graphic designer, web developer and instructional designer over the course of 13 years. She now writes full time.
CL Taylor’s first psychological thriller THE ACCIDENT has sold over 150,000 copies in the UK alone and was one of the top ten bestselling debut novels of 2014 according to The Bookseller. Her second novel, THE LIE, charted at number 5 in the Sunday Times Bestsellers list within 10 days of being published.
http://www.cltaylorauthor.com
http://www.twitter.com/callytaylor
http://www.facebook.com/callytaylorauthor