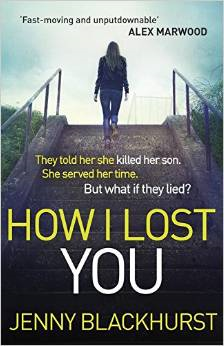 They told her she killed her son. She served her time. But what if they lied?
I have no memory of what happened but I was told I killed my son. And you believe what your loved ones, your doctor and the police tell you, don’t you?
My name is Emma Cartwright. Three years ago I was Susan Webster, and I murdered by 12-week-old son Dylan. I was sent to Oakdale Psychiatric Institute for my crime, and four weeks ago I was released early on parole with a new identity, address and a chance to rebuild my tattered life.
This morning, I received an envelope addressed to Susan Webster. Inside it was a photograph of a toddler called Dylan. Now I am questioning everything I believe because if I have no memory of the event, how can I truly believe he’s dead?
If there was the smallest chance your son was alive, what would you do to get him back?
Review
Thank you to Headline and NetGalley for providing me with a copy of How I Lost You in return for an honest review.
How I Lost You is the debut novel from British author Jenny Blackhurst. It is a psychological thriller, telling the take of a woman convicted for the murder of her young baby. Upon release from the psychiatric hospital, she is sent a photograph of a young boy and starts to question whether her son, Dylan, really dead or it this just one big conspiracy/cover-up? If so, why?
I am a big fan of crime novels and I was immediately intrigued by the blurb for How I Lost You. I was pleased to find that this book is something a little bit different from the norm.
Emma/Susan is an interesting character. I found her to be somewhat self-pitying, however this is not surprising given that she has been through a devastating experience, which she is unable to remember. She is trying to rebuild her life, yet this is not helped by having to keep looking over her shoulder at every corner due to a feeling that someone is watching her and playing games with her feelings. She needs answers and nothing is going to stop her from uncovering the secrets that everybody seems to be keeping from her.
The supporting cast, Cassie (a friend from the psychiatric hospital) and Nick (a journalist), are there to support Emma/Susan as she attempts to unravel the mystery surrounding her son’s death.  I must admit that I found it slightly odd that Emma/Susan would put her trust in Nick so quickly, given his career choice and her own recent experiences. I would have expected her to be more wary of accepting his assistance.
I initially thought that I would struggle with the story as I could not see how someone could be convicted of a murder that maybe didn’t occur after all. However, (once I left my cynicism at the door) Blackhurst neatly ties up the plot to show how this could be possible if all the circumstances are right.
I did have an idea as to how the story would end, and I therefore wasn’t too surprised by the ending, however I was surprised by the story leading to that finale. This was an unexpected addition to the storyline, a twist which I found to be not overly believable but nevertheless interesting.
I found the book to be entertaining, upsetting and thrilling in equal measure. I read it from cover to cover in only a few sittings. The plot was relatively complex and it could have been somewhat difficult to believe, had Blackhurst’s writing not been so good.There are some great twists in the story that I was not expecting and which made it a unique and interesting read!
Overall, How I Lost You is a good debut novel. It’s well written, has a unique storyline and proved itself to be an entertaining read. I look forward to reading more from Jenny Blackhurst.
Buy Links
Amazon UK:   Kindle – http://www.amazon.co.uk/dp/B00KM19Y40
Paperback – http://www.amazon.co.uk/dp/1472218965
Amazon US:    Kindle – http://amzn.com/B00KM19Y40
Paperback – http://amzn.com/1472218965
About the Author
Jenny Blackhurst grew up in Shropshire where she still lives with her husband and children. Growing up she spent hours reading and talking about crime novels – writing her own seemed like natural progression. Inspired by the emotions she felt around her own son’s birth, How I Lost You is Jenny’s thrilling debut crime novel.