Title: The Snow Kimono
Author: Mark Henshaw
Publication Date: 9 April 2015
Publisher: Tinder Press
Twitter: @TinderPress
Blog/Website: http://www.markhenshaw.com/
Rating: 3 out of 5
Synopsis
On the same day that retired police inspector Auguste Jovert receives a letter from a woman claiming to be his daughter, he returns to his Paris apartment to find a stranger waiting for him. That stranger is a Japanese professor called Tadashi Omura. What’s brought him to Jovert’s doorstep is not clear, but then he begins to tell his story – a story of a fractured friendship, lost lovers, orphaned children, and a body left bleeding in the snow.
As Jovert pieces together the puzzle of Omura’s life, he can’t help but draw parallels with his own; for he too has lead a life that’s been extraordinary and dangerous – and based upon a lie.
Review
Thank you to Frances Gough at Headline Press Office/Tinder Press for providing me with a copy of this book for review.
The Snow Kimono is a beautifully written book. I was instantly captivated by Omura’s story and could not put the book down. From the very first paragraph, I was drawn into the story. Henshaw cleverly uses a level of description and imagery within the story that simply compelled me to read more.
The book contains one of my favourite ever opening paragraphs:
“There are times in your life when something happens after which you’re never the same. It may be something direct or indirect, or something someone says to you. But whatever it is, there is no going back. And inevitably, when it happens, it happens suddenly, without warning.”
Of particular interest to me was the lack of dialogue or “speech” between the characters, the tale being told in a mix of first person narrative and third person narrative. This gives the book an interesting dimension and makes it obvious to the reader that the story being told is someone’s recollection of events, rather than allowing the reader to experience the event(s) first hand.
The book commences in a promising fashion, taking us to rainy Paris, France where retired police inspector Jovert receives a letter from a woman claiming to be his daughter. On that same day, he receives a curious visit from Japanese professor Omura, who wants to tell him a tale of his ward, Fumiko, and his old friend, Ikedo.
Omura’s tale is absorbing. Jovert, like the reader of the book, whilst not knowing why Omura was telling him the story, feels a need to know more and to understand the story Omura is telling. For me, there was a sense of dark forboding throughout the story which made me want to know more.
Omura’s narrative includes the tale of several women, men and children. I particularly enjoyed the story of Sachiko, which initially put me in mind of Memoirs of a Geisha.
Whilst I loved reading Omura’s story, I didn’t really feel that much time was given to Jovert’s own story, set in Algiers. I thought that the writing style changed when focus shifted to Jovert becoming more abrupt and less poetical, somewhat stilted. I found it difficult to connect with or empathise with this section of the book.
Towards the end of the story, in chapter 38, the reader is also introduced to the character of Martine. I am unsure of the reason or need for her within the story, however I would have liked to read more about her and her brother Mehdi’s difficulties.
As with any good book, there is the obligatory and unexpected twist that is gently uncovered at the end of the story.
This is not an easy read and to make the most of the story, you have to really think about what you’re reading. The pace of the story is quite slow and I did feel as though I spent most of the book waiting for that ‘ah ha!’ moment when everything would tie neatly together and make sense.
Thers is one moment in the book where Omura describes his father’s view on traditional Japanese jigsaw puzzles. His description of a puzzle is that “Some pieces are small, others large, but all are calculated to deceive, to lead one astray, in order to make the puzzle as difficult, as challenging, as possible. In our tradition, how a puzzle is made, and how it is solved, reveals some greater truth about the world”. I get the impression that the author is creating a verbal puzzle for the reader, creating a challenge for that reader to uncover.
I finished the story with a feeling of frustration as I felt that The Snow Kimono had the potential to be brilliant and yet, for me, it stumbled at the very last hurdle. Whilst Henshaw is obviously a gifted storyteller, I didn’t really ‘get’ how Omura’s and Jovert’s stories overlapped. I could quite happily have read Omura’s story as a standalone tale.
I have seen other comments/reviews for The Snow Kimono refer to a theme of repentance or atonement and certainly, both stories tell of love, lies and ethical dilemas that the characters face. However, I would find it difficult to succinctly summarise the plot or underlying message of this book.
Overall, the book is compelling, absorbing and confusing. I have rated the book 3 out of 5 purely due to my enjoyment of Omura’s narrative and the wonderful writing style used to tell that tale.
Buy Links
Amazon UK:   Paperback – http://www.amazon.co.uk/dp/1922182346
Hardcover – http://www.amazon.co.uk/dp/1472225694
Kindle – http://www.amazon.co.uk/dp/B00N9AVLYM
Amazon US:    Paperback – http://amzn.com/1922182346
Kindle – http://amzn.com/B00N9AVLYM
About the Author 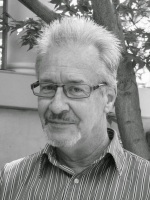 Mark Henshaw has lived in France, Germany, Yugoslavia and the USA. He currently lives in Canberra. His first novel, Out of the Line of Fire (1988), won the FAW Barbara Ramsden Award and the NBC New Writers Award. It was one of the biggest selling Australian literary novels of the decade. For many years Mark was a curator at the National Gallery of Australia. He recently returned to writing fiction full-time.